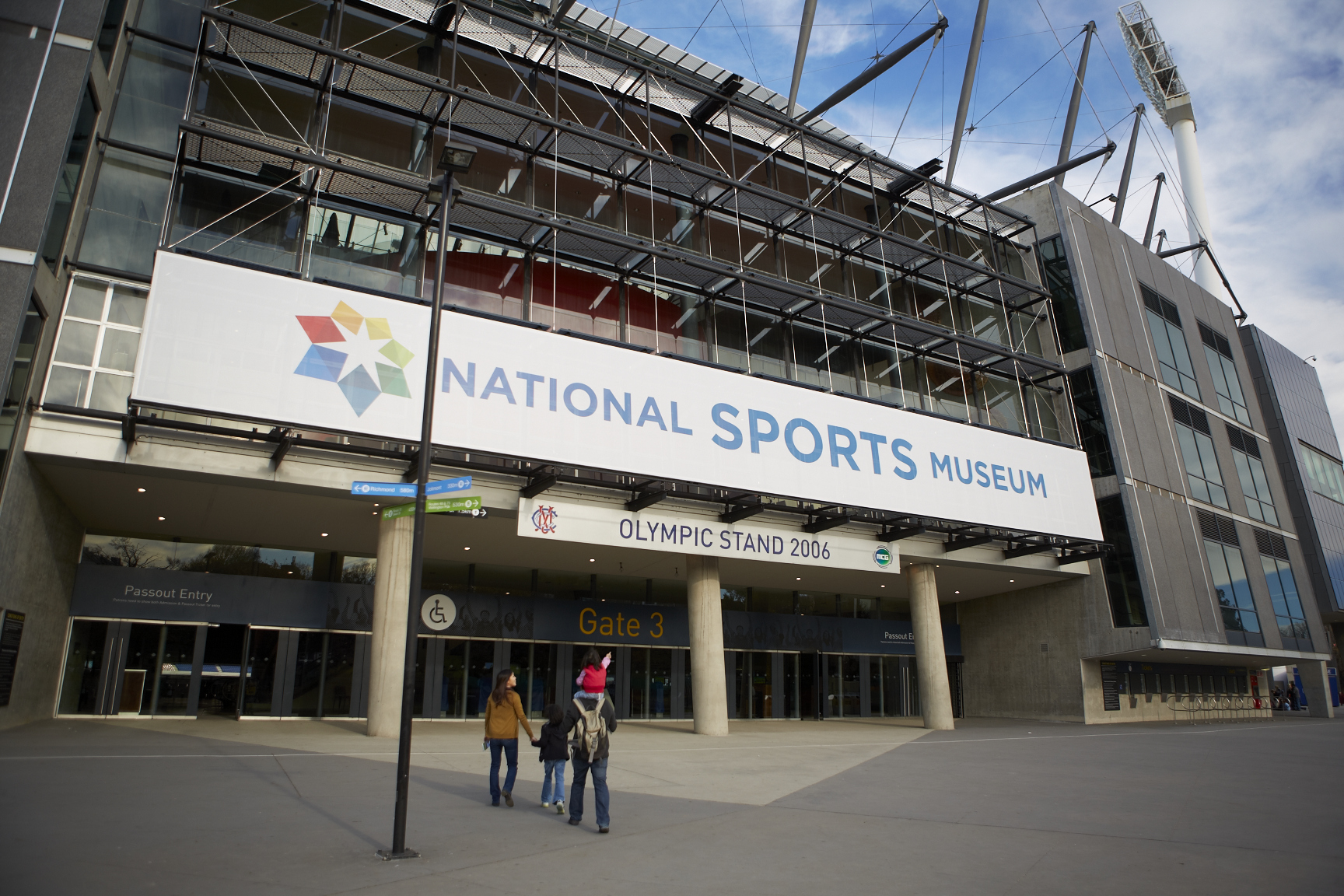 When:  Opening times vary depending on events at the MCG, refer to the NSM website for more details.

Cost:  Adult $20, Child aged 5 – 15 $10, Children under 5 FREE.  On certain event days patrons are able to visit the NSM at a discounted price, click here for details.

If you have been following Meetoo for awhile you might have noticed a bit of a pattern emerging that leans towards the arts – and I can’t pretend that my personal interests don’t influence what we see and do, at the end of the day I am the one that organises where we go.  So it wont surprise you that the advert for the National Sports Museum I spied in a weekend paper eight months ago was almost overlooked – but I put my Meetoo hat on and ripped the advert out thinking, “I should look into that.”  And then it was filed away (in my pile).

My file (okay my pile of papers) regularly gets reviewed (whenever people come for dinner and I have to clear the table to fit more than the four of us) and so I kept coming across this ripped out bit of newspaper and wondering curiously what on earth it could be.  I assumed (very wrongly) it must be some little gallery filled with old cricket bats in some corner of the MCG.  No doubt regulars to the MCG are reading this and laughing at my utter naivety.

Anyway I did finally get organised and we went along to see what it was all about.  We were there for about 2 hours (possibly longer).  While I am not really into footy (yes I know, sacrilege) I do love the Olympics and the Commonwealth Games, I am guilty of enjoying the Melbourne Cup Carnival, the Australian Open is one of my favourite spectator sports and I am quite fond of trivia – it turns out the National Sports Museum was full of stuff I like.

Naturally there was plenty of cricket content (helped by the fact that the MCC Museum is attached to the National Sports Museum).  But there were also plenty of other sporting genres represented, as well as (to satisfy my architectural leanings) an exhibition on the MCG called The Peoples Ground – which included some interesting history about the architecture of the MCG.  Apparently records indicate that one of the early stands built could flip (I am sure there was better terminology used in the exhibition) so that it could face outwards and be used for games played on the oval next door – how fabulous!

The kids moved pretty quickly through the traditional parts of the Museum (there are 13 exhibition spaces in total) – stopping to inspect a few things of interest as they went along.  Thankfully daddy came with us so I could wander slowly and read.  Also there is no photography allowed inside the Museum so I really did just get to enjoy looking and reading.  When I did catch up to the others they had made their way into a space called Game On!

Game On! is an interactive area that allows visitors to challenge themselves with simulated experiences in netball, cricket, football, rugby, bike racing, soccer and archery.  The kids easily spent an hour in Game On! and had plenty of goes at everything – the weekend we attended there were no events happening at the MCG and so perhaps that explains why there were barely any visitors in the Museum; there were two other families and a few other small parties.  In the Game On! space you are welcome to take photographs, so thankfully I could use that as my excuse for putting the netball down after 20 minutes of goal shooting.

Next to Game On! is NSM Cinema Sport which a cinema filled with comfy seats (perfect after an hour of running about in Game On!) and looping short documentaries.  There were three films on offer the day we were there – and so if you sat and watched all three back to back it was about 30 minutes of screen time.

I should also mention that as we moved around the exhibition spaces there were a number of staff on hand to answer questions and share their knowledge – it’s always lovely to meet people who clearly love what they do.

During January 2014 there are a few extra activities for the school holidays, click here for more details.

Commercial Disclosure: I was provided with tickets to enter the National Sports Museum.  There was no expectation that I would publish a review in exchange for the tickets. All views are my own.

← Come roll with us
Eureka Skydeck →