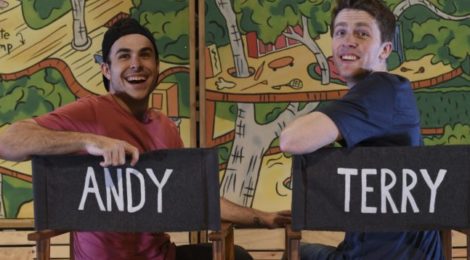 The next installment of one of our very favourite series of books, The 78-Storey Treehouse, has arrived on stage at The Arts Centre Melbourne.  Expectations were set high – and the Treehouse gang delivered.

Thank you, Sally T Ridden and mini reviewers for visiting on behalf of Meetoo and sharing this excellent review.

This is not a book, this time it’s a movie. Come on up, there’s 13 new levels, what are you waiting for?!

It’s all lights, camera and action in the tree house this time for Andy and Terry.  Probably more so for Terry who’s been chosen to star in the movie that has minimal talking and includes a man vs shark vs electric underpants.  Jill is back and working on her intergalactic space animal service.  Andy has been dumped as the narrator by Mr Big Shot and replaced by Mel Gibbon the primate.  Lets’ not forget the plot twist of the Spy Cows, moo cows stealing scenes directly from their book.   The movie includes a flying cat and catapault, a combining machine, unidirectional speakers and a scribbletorium.

But wait.  Terry and Andy are no longer friends as Terry’s rise to superstardom makes him “super dumb dumb dumb” according to Andy.

On level 73 there’s ANDYLAND the ANDYest place on earth where you need to prove you’re an Andy with trick questions and passwords. Friendships got so heated and complicated with all the movie hype, Andy threw Terry into a black hole whilst they were both fighting in space.  Only with the help of Jill, and by throwing into the combining machine a combination of skin, bones, underpants, leaves and a tail, could Terry return and friendships be restored.

Meanwhile someone had broken into Andy’s high security potato chip storage facility leaving him with only a cardboard replacement solo chip.  He really should have read the cardboard I Owe U note. Lucikly, Intestellar Chips gifted later from Jill resolve the mystery.

And of course those Spy Cows Daisy, Bluebell and Buttercup steal the red-carpet limelight VIP Opening night off them with their hijacked movie concept The 78-storey Cowhouse, which is udderly ridiculous, as who in the world will believe a bunch of cows have stolen their ideas?!

Back at the Scribbletorium Andy & Terry hastily write up their stories and collect the best of bits from the movie and throw it into the combining machine to create their newest book.  Jill’s massive egg hatches with a turbo tortoise inside. With only 5 minute left to deliver the book to Mr Big Nose by midnight they realise a way for the turbo tortoise to be even faster than a Ferrari driving a speeding bullet with the help of the cat catapault.  It just goes to show no matter how crazy the adventures may seem, things always seem to work out… somehow.

Thank you for sharing your treehouse Andy and Terry, the treehouse that is your home.  No one will ever forget.  We’ve all had the best time yet.

← Garfield, the Musical with Cattitude
Improvilicious: the improvised guide to Superheroes →