BARNUM first debuted on Broadway in 1980 and over the years it has starred legends such as Glenn Close, Reg Livermore and Michael Crawford.  Now you can add Todd McKenney, Rachael Beck, Suzie Mathers and Kirby Burgess to that list. 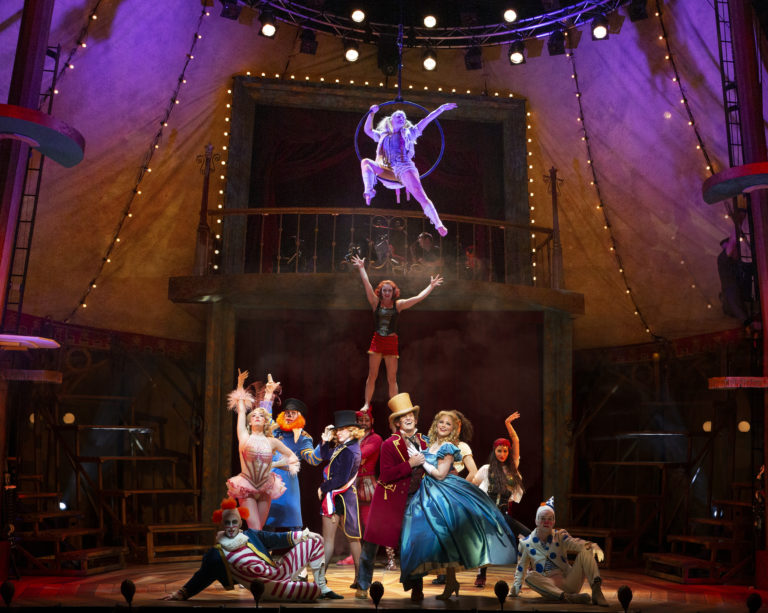 This production features a fantastic cast – they can sing, dance, balance on each others shoulders, tightrope and more!  Barnum is both a polished musical theatre and, equally, a fabulous circus.  The tunes were catchy (always a good sign to wake up the following morning still humming one of the tunes).  I loved the costumes, and Charlie and I both agreed the acrobats were fabulous.

Charlie (10) was starting to get a little bit fidgety before the interval – Act 1 felt epic with a lot of the story to cover.  Act 2 moved much more quickly, leaving us wishing there was more.

Worth remembering is that the Comedy Theater doesn’t have booster seats for the kids – and even though Charlie is tall for his age he struggled to see (so we fashioned a makeshift cushion from my handbag and a coat).  And if you want to beat the bathroom queue be sure to leap to your feet as soon as the curtain descends for the interval.

Based on the life of Phineas Taylor Barnum, BARNUM is a colourful, dynamic spectacle with heart, where we witness the wonders of the world P. T. Barnum style, aka the humbug.  Some of Barnum’s famous attractions make the cut including Jumbo, the largest elephant, Joice Heth the oldest woman to ever live, General Tom Thumb only twenty-five inches from toe to crown, and the rarest and most beautiful bird in captivity the Swedish nightingale, Jenny Lind.