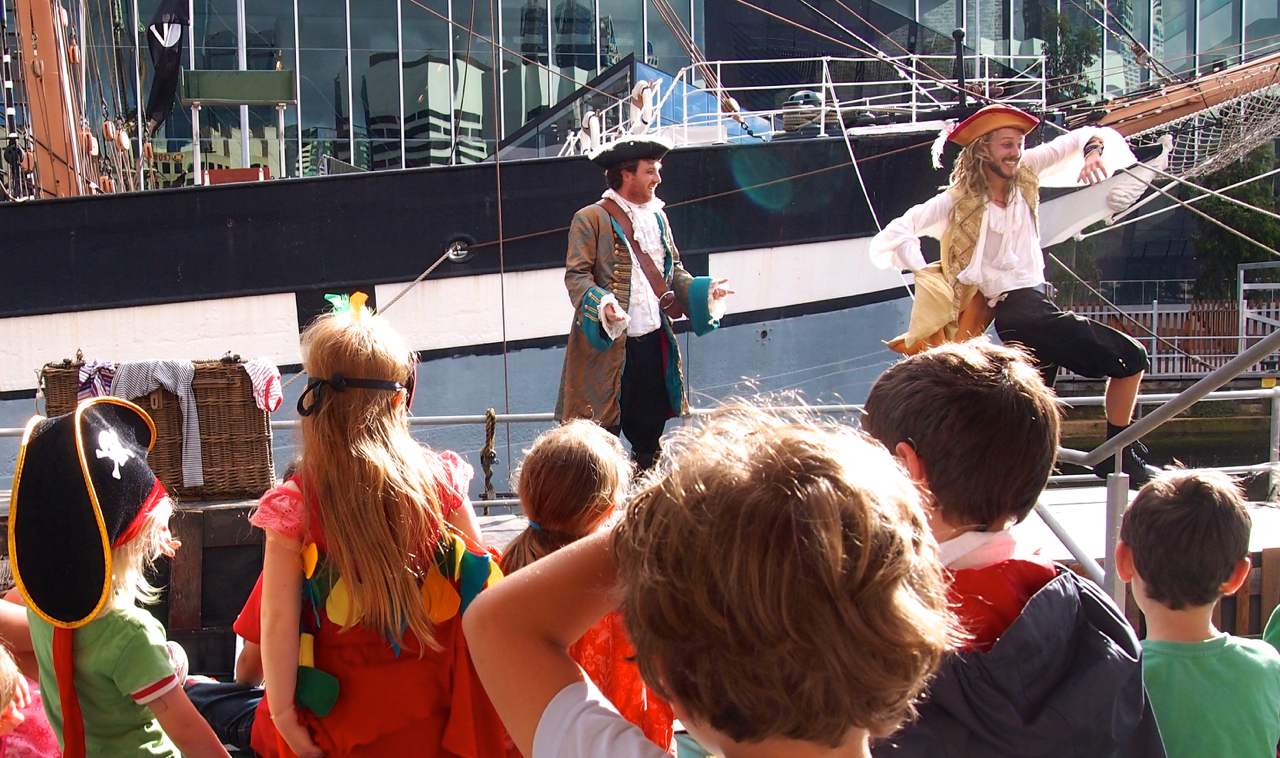 Caribbean Pirates at the Polly Woodside

This is a live performance that will entertain the littlest pirates through to the grown ups – loads of laughs and action, plus audience participation in the form of hunting for pirate gold, aarrgghh.

When: Until 24 January 2015, 10am and 6pm on certain days, click here for all the dates/times (performance will go ahead unless extreme weather as audience is under cover)

This production runs for about 1 and a half hours (they say one hour on the official website but after the show there is time for photos with the cast and also more time to explore Polly Woodside).  There is never a dull moment as the performance is full of action (in the form of duels and sight gags), suspense (is Larry really being stabbed inside the basket) and song – not to mention time on the deck of Polly Woodside searching for gold and organising a mutiny.

We went to an evening performance and the kids ate their sushi rolls (aka dinner) while they watched the first act.

The day we went along it had been bucketing rain and a low dark cloud had covered Melbourne all day.. at 4pm I checked with the production company to see if the show would go on (given sideways rain was slashing on my office window and our tennis clinic had long been cancelled).

But who would have imagined (you’d think after 40 years I’d no longer be surprised by Melbourne weather) – by 6pm the clouds had evaporated and the sun was shining – so much so we were all striping down to t-shirts and wishing we’d brought along a hat (I noticed some audience members actually put up their umbrellas to shade themselves).  As you can see from the photos it was a glorious evening!

Just in case you’re wondering – the audience seating does have some cover, enough cover to protect you from say a shower (not sure about torrential sideways rain tho!).  And if you’re unsure you can always call either Polly Woodside (9699 9760) or The Australian Shakespearean Company (1300 122 344) to check if it’s a close call.

More about the show!  The performers were fantastic – clearly they were having loads of fun embracing their characters.  The kids were enthralled.  I took three six-year-old boys with me.  The energy levels in the car on the way there were off the charts, from the car to Polly Woodside I felt like I was herding monkeys (quite literally as they climbed, zig-zagged and leaped the entire way there).  But the moment they sat down they were transfixed.  And the littlest audience members were super cute – they believed the pirates were real and some had even come in costume (awwahh three year olds can be so adorable).

If you have pirate lovers (or just kids who enjoy an adventure) then don’t miss Caribbean Pirates on the Polly Woodside this January.

{WIN} just in time for the school hols we have 10