Browse: Home   /   Carnival of the Animals (at the Arts Centre) 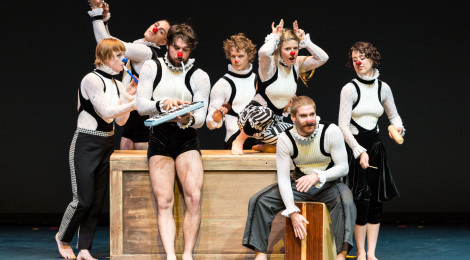 Carnival of the Animals (at the Arts Centre)

Kate Nelson / September 29, 2015 / Comments Off on Carnival of the Animals (at the Arts Centre) / Activity, CBD, Creative, Events & Shows

The Carnival of the Animals is a stunning introduction to the world of acrobatics and circus tricks for young theatregoers.

Thank you to Meetoo contributor Sally T. Ridden for her review.

Roll up roll up.  The animals came marching by one by one hoorah hoorah!  The opening performance of the Carnival of the Animals at the Playhouse Theatre had the kids (and a few fun-faring parents) dressed in their favourite onesies, pj’s, costumes, tutus and masks in theme for the animal carnival.

The Carnival of the Animals is a wonderful production directed by Yaron Lifschitx and performed by the Brisbane contemporary circus troupe Circa.  A stunning introduction to the world of acrobatics and circus tricks.  Creatures from both land and sea were featured in the 50-minute thrilling spectacle.  My 3.10 yr old thought it was going to be scary and hid behind the seats but when the show started he was spell-bound by the opening sights and sounds; screaming out “that’s not scary, I can do that!”.  Umm probably not just yet.  Ahh to be three and invincible.

Through their incredible acrobatics the performers took us to a whimsical word featuring the animal kingdom brought to life through a combination of classical music by Camille Saint-Saens, spectacular bright digital animation and simple musical solos paired with dramatic tumbling and human towers.

The subtle and frequent humour was perfect for the kids, chickens literally “egged themselves”, whilst being frightened they simultaneously laid eggs together – an absolute crowd favourite moment.

We experienced underwater seahorses, fish, arctic penguins and even sharks, it may have been about to get a little bit scary but when the rubber sharks came out and were greeting the audience and started kissing (yes kissing not eating the audience) well, of course my son wanted to be eaten by one!

Other favourite moments included the simplistic and beautiful butterflys coming out of their cocoons.  We also loved the frogs on unicycles jumping through wooden hoops with slow motion tumble effects.

There was a funky street dance elephant who was getting his groove on amidst some breakdance and hip hop, he even spun on his trunk, before crashing through the graffiti wall.

The Carnival of the Animals is a celebration of the human bodies possibilities – tumbling, acrobatics, humour, singing (including some really bad by the very tall funny lady),  classical music, paper planes, big red balloons, light and sound.  An absolute recipe for kids entertainment success.  The dinosaur bones coming together to make a stegosaurus only reinforced the shows success for my son.  Truly a mesmerising little show, that should not be missed – it will be played out in your child’s memory long into the future.

← What we saw at the NGV
The Blackman →