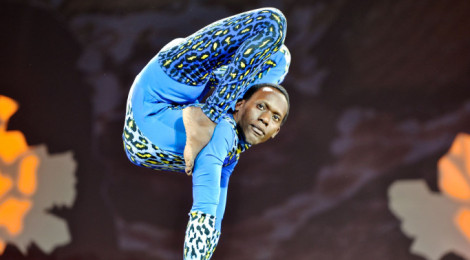 Just when you think you’ve seen all there is to see in a live acrobatic performance, along comes Cirque Africa to demonstrate how circus can be done in a uniquely African way.

Directed by Winston Ruddle aka Papa Africa, Cirque Africa introduces 38 performing artists and an eight piece live band to Australian audiences, performing under the big top tent for the first time.  Highly-skilled men and women from all over the African continent make up the Cirque Africa troupe that are on an epic mission to travel the land of Oz, performing their talents to audiences over two years before heading across the Tasman Sea to New Zealand for a third year.

The intimate stage within Cirque Africa’s big top tent is filled with a warmth that is radiated from each performing artist.  From the jugglers that toss more than a handful of clubs at a speed you will find hard to believe, to the foot juggler spinning a table that couldn’t be much more than her body weight, all performers present their showmanship with ease and enjoyment.  The human pyramid tumblers do not flinch once as they climb up apparatus as quickly as well as they do each others shoulders, and finish with smiles from ear to ear.  Two contortionists bend and squeeze their tiny frames in a way you wouldn’t think humanly possible, which  sees even the tough guys in the audience squirm at the sight.  Each and every act wows the audience as much as the last, right through to the finale; a young Ethiopian boy juggled by the feet of his country fellowman with such precision and speed that he could be mistaken for a doll.

Cirque Africa shouldn’t be compared to other big name circus acts because it is so different in character.  Sure there might not be state-of-the-art effects or a flash stage set, but what makes up for that is a solid and energetic show filled with traditional African costume and toe-tapping live beats.  Cirque Africa introduces a little piece of Africa to Aussie audiences that makes for a highly entertaining and thoroughly enjoyable show for children and grown-ups alike.