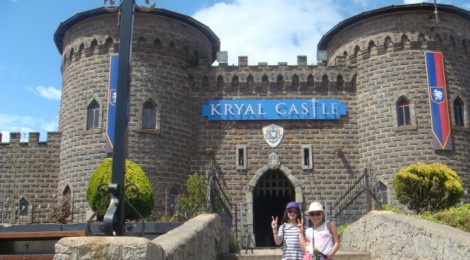 This summer holidays Kryal Castle is celebrating the ‘Magic of Merlin’.

When: Magic of Merlin school holiday activities at Kryal Castle happens daily from 10am – 4pm until January 27, 2016

Many thanks to our contributor Thuy On for her fabulous review and photos.

Situated just outside of Ballarat, about an hour’s drive from Melbourne, is Kryal Castle, reputedly “Australia’s only medieval theme park”. As guests of Meetoo, our family of three, plus a friend of Miss 8, were thrilled to check out what the castle village had to offer.  After years of reading stories set in castles and after having spent many summers building sandcastles of their own, the kids were excited to see a real-life fortress. The grey, solidly built structure loomed intimidatingly over us and we were pleased to note there was an actual drawbridge over the moat (though, disappointingly there wasn’t much water underneath).

These school holidays Kyral Castle has a special program (until Jan 26th) and visitors should allocate at least 3 hours to do a full sweep of the activities. At half hour or hourly intervals there are mock battles, jousting tournaments and sword fights between knights on horseback in the castle arena – a large enough space for the demonstrations to take place, with guests directed to sit on (shaded) stair areas. It’s all campy panto material (don’t go expecting high theatrical values) but the actors, in full costume, all seemed to have a great time, especially since some of them were wearing 40 kilos worth of heavy armour in 30+ temperatures!

The story in each instalment is short and easily understood by the young and involve Camelot characters such as Merlin the Wizard, King Arthur and his Queen Guinevere (whose role alas, seems to be nothing more than as a damsel in distress) and the arch and villainous Morgana, and her partner in crime Mordrid. Lots of booing and cheering from the audience is expected so don’t be shy!

Aside from these staged performances in the grandstand, there are plenty of other attractions in Kryal Castle. A highlight was a visit to the Wizards Workroom to see flaming potions being mixed. There were various bottled specimens stacked in the high shelves and a great number of other dusty paraphernalia on show.

The girls were enthusiastic about the maze near the entrance of the castle but got lost and had to have some adult help to negotiate the path out. They also had a go at archery practice (there is extra cost for this activity but it’s minimal) and they both got a thrill from shooting their arrows so neatly and cleanly into the bull’s eye after only a couple of test runs. For preschoolers, there’s a playground available and also face-painting. School-aged kids can try perfume-making and calligraphy.

And for those who aren’t squeamish (recommended age 13+), there’s even a pretty gruesome torture museum and special effects dungeon. We had a quick look but did not linger on these distressing scenes of medieval torture. The girls were also a bit scared to visit the dragon’s labyrinth. (Too dark and too many spooky noises and sudden door closes apparently).

Luckily there was lots more to do, like visiting the chambers of the King and Queen and the ancient cemetery; admiring the glass-stained chapel and trying to pull out the fabled Excalibur sword; as well as visiting the animal nursery. Photo opportunities with the costumed characters were also encouraged.

Kryal Castle offers a medieval-lite experience for kids and hopefully will inspire them to research the period more deeply should they choose to later on. But there’s enough entertainment there so it’s not just educational.

Thuy was invited on behalf of Meetoo as a guest of Kryal Castle, all views are her own.

Looking for other ideas while you’re visiting Ballarat?  Check out: