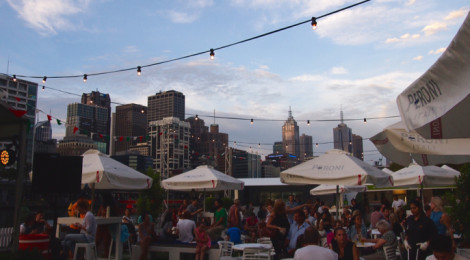 River Graze is a three-day event along the banks of the Yarra River as part of the Melbourne Food and Wine Festival.  It’s FREE to come along and check out and there is lots of yummy family fun to be had.

Where:  From Federation Square all the way to the North Warf, but the main concetration of activity happens along Southbank.

Cost: FREE entry.  Many FREE activities too, there are some ticketed workshops and plenty of amazing food to graze on!  More info here.

We were invited as guests of 400 Gradi – who were part of the inaugural AVPN Pizza Fest (located just outside Crown).

Our visit to River Graze began at the Arts Centre on St Kilda Road – we were headed for the AVPN Pizza Fest but the directions we’d been supplied were very vague (ie we were told to find the information booth on Southbank – except no one knew what we were talking about – but it didn’t really matter as we didn’t mind wandering along the river on a balmy evening enjoying the fun and soaking up the atmosphere).

Not far into our walk we came the Sanpellegrino stand – they couldn’t help us with finding the Pizza Fest, but they did have bocce to play, were super friendly and there were refreshing drinks to enjoy.  So the kids had a few games before we continued on.  Along the way, we checked out all the fabulous food stalls and trucks – omg it would literally take days to eat your way along the river!

Our next stop was the dimmi First Date booth – an enclosure that is a 3D simulation of the butterflies you might experience on a first date, but rather than the kind in your tummy they were the kind that fly about you – how sweet!  There was a little queue to have a turn, but it moved quickly.  Once inside it was pretty hot.  Given the outside temp was already muggy I can tell you after about 3 minutes inside the enclosure the kids had sweat running down their faces and I thought I was going to pass out… yup think that’s not far off the mark for a first date simulation (#lol).

What a gorgeous night to be out – and it was a nice amount of bustle along the path without being crazy crowded.  Melbourne felt alive and we even had a double rainbow moment.

We came to the Urban Dairy which looked awesome – St Ali coffee greeted us on one side of the opening, gay ice cream from America on the other, and that was even without seeing the cheese happenings on the inside of the fence (so we are totally going to go back for a proper visit tomorrow as by this point the kids were getting hungry and we needed to find the Pizza Fest stat).

And thankfully just across the road outside Crown was the AVPN Pizza Fest.  Our timing was perfect – I managed to feed the kids pizza just before the Pizza Acrobatics (who knew there was such a thing!).  Anyway, it seems Charlie (7) has a new calling in life – he’s running away to join the pizza circus.  He even bought his lump of juggling dough home with us to practice.

Charlie was given flour “war” paint and some acrobatic dough

Immi very quickly discovered the iScream nails table who are doing FREE nail art.  There was also a buffalo mozzarella making demonstration, (which you could taste) and live music.

It was a very jolly vibe in the AVPN Pizza Fest enclosure – and the 400 Gradi pizzas were delicious.

With 21 different pop-up event/enclosures set up along the Yarra this weekend you won’t run out of things to do, eat and drink – oh and if you walk from one end to the other and are too tired to walk back?  There is a ferry service operating along the river – it’s $5.50 per person (under 3’s are free).  Check out all the River Graze action on the MFWF website.

← Bobux are too cool for school {bummer}
What’s on in Melbourne: April School Holidays →