Okay, this one is quite a mouthful, but the NGV’s Winter Masterpieces 2019 is actually two stories intertwined.  Terracotta Warriors: Guardians of Immortality and Cai Guo-Qiang: The Transient Landscape.

When: until 13 October – recommend this exhibition for school-aged children

They are behind heavily fortified glass, these terracotta warriors (eight on loan) from an army of (an estimated seven) thousands but their appeal is magnetic.  It’s humbling to stand in front of them, so serene despite their designated role as protective guardians of the tomb of the Emperor.

If you look closely, the ones on display are all different from each other, and not just via stance (some are kneeling and poised for archery). Though about 1.8 metres each (so, life-sized), the costumes, bearing, facial features and hair are especially set to denote different ranks.  There is even a civil servant in the mix (who would have looked after the Emperor’s civil affairs).  Originally, the warriors would have been fully equipped with real weapons (spears, lances, swords), but alas, they are not shown with them here.  In their present state, these models are formidable and implacable, one can only imagine how they would have presented in their original painted glory.

There’s no doubting that the 2200-year-old warriors are a star attraction but awe is not limited to them alone in this exhibition.

Exhibits of terracotta figures from the time of the successive ruler, Emperor Jing, include half metre figures warriors and a collection of domestic and companion animals (dogs, sheep, horses, ox, chickens), all created to be buried with its ruler for afterlife prosperity. The joy of seeing these inclusions is that in some cases the coloured pigment is still visible. The attention to detail of all the artworks, big or small, is nothing short of impressive.

Old meets new, permanence confronts ephemerality: it sounds like a cliche but in this instance the description holds true. The latest blockbuster NGV exhibition (very much like the former Escher one) places together works of historic beauty against a modern aesthetic. As part of Melbourne Winter Masterpieces, relics from the tomb of China’s first emperor Qin Shi Huang, dated all the way back in the 3rd century, is seen in conjunction with works from one of China’s famous contemporary artist, Cai Guo-Qiang.

There are about 150 artifacts on display, many showcased for the first time in Australia: as well as the warriors, two full-sized horses as well as earthenware, bronze arrowheads, carved jade and replicas of two half-scale bronze chariots decorated with gold and silver.

Interspersed with these ancient treasures are the works of Cai Guo-Qiang. Born in China, the artist now lives in New York. Cai directed the visual effects of the 2008 Beijing Olympics and has exhibited widely around the world. His especially curated works for this exhibition include the startlingly beautiful murmuration of 10,000 porcelain starlings, hung overhead and large scale paintings on Japanese hemp paper coloured by gunpowder explosion. (At the end of the exhibition, visitors can watch a short video showing how the pyrotechnics was enacted in a Melbourne warehouse). The juxtaposition of his work alongside the tomb excavations continues the lineage of Chinese craftsmanship, these pieces both durable and delicate. 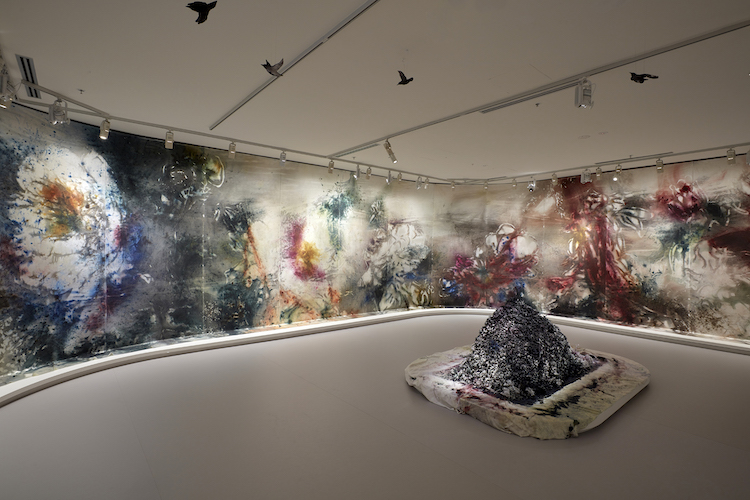 Visiting the NGV with the kids?  Don’t miss Alexander Calder: Workshop for Kids

Looking for a special addition to your Terracotta Warrior experience?  Sofitel Melbourne on Collins is hosting a series of unforgettable high teas, we went along and you can read about it here.

← Barnum
Salts of the Earth →