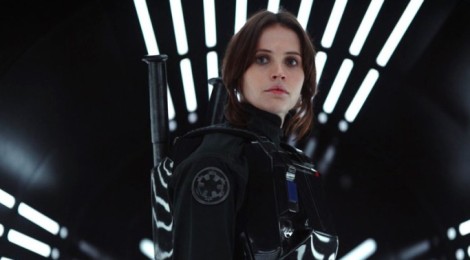 Rogue One : A Star Wars Story

Rogue One blasts onto our screens – it’s rated PG 13 but could well be the most violent of the Star Wars franchise.

This Star Wars film fills the gaps between Episode III and IV – with the story behind the Death Star.  The level of information and political back story went completely over Charlie’s (8) head – and the story moved at a breakneck pace as we bounced about the Galaxy piecing together the bits of information that provided anyone (probably aged 10+) with some Star Wars knowledge an “ah ha” moment.

As a parent, it’s well worth knowing that there are many heavy battle scenes (I certainly felt uneasy about my 8-year-old taking it all in, but he would tell you he loved every minute).  The Rebels are fighting a war that felt akin to a Middle Eastern melting pot of tension – I think any adult would appreciate the depth of such combat much more than a child.  Whilst bodies went flying in explosions and Tsunamis – we were spared any tortured faces or gory details, and our faceless Storm Troupers help make it a little less personal.

The first half of the movie didn’t have the same feel of any other Star Wars film – it was only about halfway in that little spikes in the music score and a few sprinkles of characters we know and love from Episode IV are glimpsed, that lets us know this is really Star Wars.  It was also around this point in the film that the story gathers real momentum and we know who our heroes are.

I am rather selective about what films Charlie is allowed to see on my watch and this was definitely pushing the boundaries of my comfort zone – it’s only my sentimental attachment to Star Wars and Charlie’s utter passion for the films that swayed me.  It’s a film that we will no doubt have many discussions about (especially if the ride home in the car was anything to go by!) as he works out just which piece of the puzzle this story fits into – he was full of questions (a perfect excuse to watch Episode IV again!).

This film is 2 hours and 13 minutes long… add in trailers (which at a preview we have the luxury of skipping) and it’s a long time confined to a seat (especially if you are handed a big lemonade as you walk in the cinema).  We just made it to the end and then had to bolt to the facilities…

Finally – I should mention, I really enjoyed this chapter of the story.  It shed some new light on the saga, was exciting and felt more human (not sure if that’s the right word – but there were more human characters for a start!).