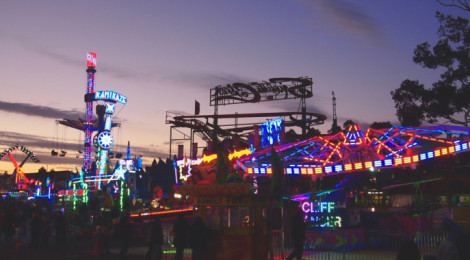 Here’s a bit of a run down on what we saw at the Royal Melbourne Show this year.. part photo gallery part diary of an outing.

When:10am – 9pm daily, Saturday 19 to Tuesday 29 September 2015
Where: Melbourne Showgrounds
Cost: General Admission family ticket is $85, but there are so many ticket options it’s best to check them all out to see what works for you (and there are discounts for booking early, online or at Woolworths).  Click here for more information.

It was bucketing rain at 2pm, the time we’d scheduled with my cousin to head off to the show.  So we hung back at home and drank a cup of tea whilst studying the BOM radar, deciding that we’d give it 30 minutes to blow over.  It was still raining when we pulled out of the drive to head to the station… but as the “show” train departed Southern Cross Station we could see clear sky ahead.. hurrah, we had read the radar correctly and the rain was clearing. (At about 4.30pm the sun even came out!)

The plan for the day was pretty simple.  I wanted to see the dogs and the wood chopping and my cousin wanted to see the crafts and cooking – the kids were keen on a ride and show-bags, show-bags and preferably more show-bags… Oh and there was initially some mutterings of watching the evening performance of motor bikes on the main arena followed by fireworks, but the day just seemed to get colder and so thankfully no one mentioned that idea again (after dark it would have been freezing).  Anything beyond these requests was a bonus in my books.

Now first an observation – the people at the Show have tinkered with the layout again.  Not in a bad way.

If you have been previously you will notice that the gourmet food (Tastes of Victoria is now called Winning Tastes) has moved away from next door to the Woolworths Pavilion and is over in the MasterChef building – if you are looking for good coffee, a groovy vibe and amazing food then make this your dinner or lunch destination.  Despite it being a quiet day at the show today (given it’s early in the season and a cold wet day) it was busy at Winning Tastes – I imagine on a busy Show day it could get rather crowded; it’s not a huge space and outside there isn’t a huge amount of space either.

The other main observation was that kids gardening activities has moved indoors… which is much more practical given there was very little shade previously in the outdoor area it was located in (this space is now a viewing only animal farmyard area).

As always there were parts we missed.  This year the kids (aged 7 and 9) decided they didn’t need to visit the Animal Nursery (to pat farm animals) or the Farmhouse (where cows are milked and sheep shorn), they also skipped past the kids carnival and no one asked to play one of those sideshow games – wait what… yes I am still in shock.

Going to the Show on a cold weekday is the best way to avoid the crowds.  Don’t get me wrong there were still people everywhere, but there were little to no crowds at any point, no queues and staff had more time to stop for a chat.  We had plenty of room on the train ride home too.

Checking out the dogs

Waiting in the wings for their turn to parade

Inside the Dog Pavilion

Got their Kiss makeup on!

Posing outside the Wining Tastes Pavilion.. aka MasterChef building

Patting a cat in the Pets, Garden & Outdoor Living Pavilion

So many amazing cakes!

Getting silly with ChiliPhilly in the Art Craft & Cookery Pavilion

The rides look so pretty at twilight

Check out our other Show reviews: daytime visit and nighttime visit

Are you going to the Show this year?  What are you hoping to see – or what was your favourite bit?