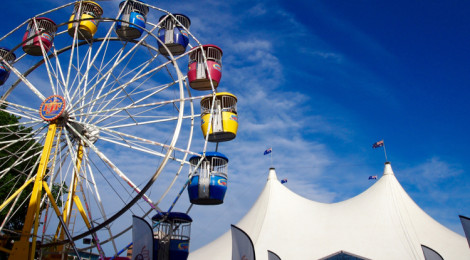 Now in its fifth year, Santa’s Magical Kingdom has well and truly established itself as an annual tradition my kids absolutely adore!  I made the mistake of opening the (unmarked) envelope containing the tickets to the opening night within view of the kids and boy you should have heard the excited squeals – so clearly we are nowhere near ready to give up SMK.

I admit in the lead up I was feeling a little jaded about returning – but as we approached the big top on opening night my heart did skip a little beat and once we were inside I was completely swept away.  These days my kids are old enough to travel around in a pack – which left me to take some photo’s and bump into some other bloggers who were roaming about.

The excitement in the air made me smile.  The bigger kids rushing about trying to fit in as many turns on the rides as possible and the smaller one just in awe of the lights and spectacle.

If you’ve been in previous years then you won’t be disappointed – all our favourite things were back!  Mrs Claus was reading stories, there was Christmas craft, gingerbread decorating, letter writing to Santa, you could visit Santa for a photo (or just to say hi) and the usual selection of rides were there.  Bang in the middle is the circus performance which was fantastic (although I had one child who absolutely loved the dogs and the other who was completely appalled – I was mostly okay with it, but it did make me a little uncomfortable).

This year the snowscape has moved to the middle area of the main tent and there has been a snow globe added – you can also have professional photographs with the snow queen in her sleigh.

The food offering this year is improved – there is more variety and some healthy options in the mix that would suit younger kids.

I don’t think I need to say it again (but I will) – we adore Santa’s Magical Kingdom and if you get the chance to go I’m sure you’ll have a blast too.

← The Landscape Project: 2016 NICA Graduates
Vjunior – a cinema for kids →