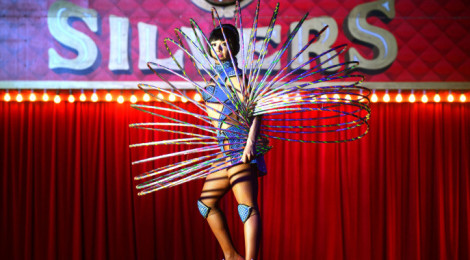 Many thanks to contributor Thuy On for attending on behalf of Meetoo and preparing this fabulous review!

It’s rare for a circus to appeal to all ages but with almost forty years experience of being on the road, Silvers Circus has fine-tuned their repertoire. There are indeed, acts that will delight the little ones as well as those that will amaze their more jaded guardians.

The two-hour duration manages to showcase a great number of acts, some locally sourced, others from overseas, with a touch of camp theatrics thrown into the mix. There’s juggling: whether it’s with balls or hula hoops  (the glow-in-the-dark neon add extra oomph to the proceedings) as well as some fine unicycling tricks as well. A magician and his glamorous assistants will disappear and reappear in a blink of an eye, and a tight wire act (with a ladder) and limber gymnastics on a large wheel and acrobatic rings are performed with a smoothness that belies the skills required behind them.

For the youngsters, there’s of course, a clown, who cajoles reluctant audience members on stage for a bit of silliness (you have been warned), and for daredevils at heart who like to live vicariously, there are some truly dangerous stunts, even more so when you consider there are no safety nets. Two in particular, deserve mention: the wheel of steel is one. It’s hard to describe but two men leap and land run inside and outside a large pair of connecting wheels at full-pelt (at one stage, there’s a blindfold involved). The wheels are not stationary but swing back and forth like a pendulum. Then there’s the signature act that best sums up Silvers Circus in terms of sheer style and audacity: the Globe of Death, where four motorbike riders whiz around a 3 ½ metre diameter metal globe, their spinning and revolving antics provoking much gasping from the audience. The brave ringmaster at one point even stands in the centre of the dome, with the bikes roaring around and above him.

Silvers Circus really is fun for the entire family. Miss 8 and her ten-year-old friend were spellbound throughout (when they weren’t bopping along to the music), while her parents (who have seen many, many circus acts before), were still mightily impressed with the quality and range of the tightly choreographed performances.

TIPS: Get there early as the show starts punctually, with a 15-minute interval. No need to bring blankets because the tent is heated. There’s food available but nothing beyond the standard fare of hot dogs, fairy floss and hot drinks. There’s also a bouncy castle if the little ones need to jump about before or after the show. It can be loud and disorientating so please be aware of that if your children are sensitive to noise and smoke.