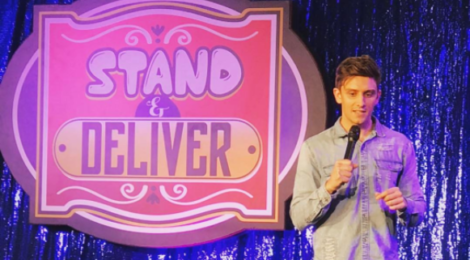 LAST DAYS: Kids can get a taste of stand-up comedy at the Melbourne International comedy festival show. “Stand and Deliver”

This review and photo was kindly provided by contributor Anna who attended the production on behalf of Meetoo.

Stand and Deliver is a production featuring a selection of performers from the 2017 Melbourne International Comedy Festival – and these performances are being filmed for ABCme which will be filled for TV and be aired in a few weeks!

With over 500 shows to choose from it can be a bit hard to decide what to see at this year’s festival; luckily the kids can get a taste of the best.  Acts may include a selection of about half a dozen different comedians, the performers we saw included:

Hosted by Susie Youssef.  With only three more shows left catch them quickly before the Festival ends this Saturday and Sunday at the Spiegeltent.

Suitable for kids 8-12 years. This show will be filmed for ABCme.

Check other festival shows we have reviewed here: The (Very) Big Laugh Out, Kids Comedy Club

{WIN} just in time for the school hols we have 10