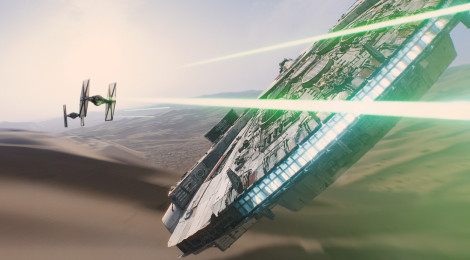 It was never a question of not taking my 7-year-old to see the new Star Wars – but I was a little worried it may not be appropriate, given The Force Awakens is rated M.

Charlie has grown up immersed in the myth of the force and the magnetic power of the dark side.  He inherited a lightsabre from a cousin when he was about three and a year later his mate’s dad lent us the box set – there was no turning back.  The Force Awakens has been a long time coming (in kid years) and it’s the first time he’s been able to experience a Star Wars movie on the big screen.

Bar one episode, all previous films have been rated PG – and going by the masses of licensed product lining the aisles of toyshops this Christmas you could be forgiven for thinking this movie was for kids (some of the toys are even made for 3-year-olds!).  So why the M rating?  The Australian Classification Board has given The Force Awakens an M rating, saying it has “moderate levels of violence and themes” and “mild language”.  An M rating means it is not recommended for people under 15 years – but M is an “advisory category” and children under 15 can see it with parental supervision.

To be honest, this is not the scariest Staw Wars I have seen.  The badies are creepy (but the yucky one is a hologram so we don’t see him in full detail), the heroes come through at the end, there are plenty of edge of your seat battle scenes in the air (that, let’s face it, are totally unreal!) and a couple of ground battles – where the only obvious fallen are Storm Troupers and definitely no blood and guts or anything too agonising.  The bad guy uses his mind power to read minds in what appears to be an invisible vice-like grip (which I guess could be uncomfortable for some viewers to watch – but at worst the victim has bulging veins in their neck and look to be suffering a migraine).  There is also a brief scene with a captured pilot who we assume has been through a rather rough interrogation (as he has some blood on his temple), but we certainly don’t witness any of the torture.  Oh and (spoiler alert) one of the main characters dies – which could be distressing, but possibly more sad for the adults than the kids?  And there aren’t any swear words used.

So I can’t explain the M rating.  My recommendation would be – if your child has loved the previous episodes they are more than likely going to love this one.  If they are nervous, prone to worry or easily frightened then probably give The Force Awakens a miss until they are 15.  In the US and UK the rating isn’t as strict.

What did we think?  Well, the film is over 2 hours in length – so you need to be able to cope with sitting still (and go to the toilet beforehand!).  The soundtrack is loud – Charlie had his fingers in his ears for many parts of it.  The story – and understanding the relationships between the new and old characters is pretty easy to work out (just as I was figuring it out the dialogue then mentions it about two or three times, just in case you hadn’t worked it out), but for a seven-year-old, working out who was who was a little challenging – and throughout Charlie had a number of questions about what was happening (and where was Luke Skywalker).

There were some lighthearted moments to break the tension, the new characters were all fantastic (the old guys, umm well Harrison Ford was mostly awesome, the others felt a little wooden), there were also still moments and the newest droid is a perfect addition to the lineup.  And the heroine is wonderful.

The soundtrack stays faithful and it’s utterly milked throughout, but it’s a great soundtrack so why not.  If you love Star Wars then don’t miss seeing the latest installment on the big screen!

Another review worth checking out is on a website (based in the US) I love, Common Sense Media.