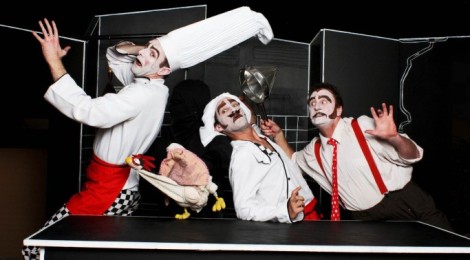 In The Magic Chicken, a pantomime full of silly slapstick humour, words are completely unnecessary. All you need to wow the crowd (and this ranges from small children to adults) are two chefs, a baddie and, of course, a cheeky fowl.

Before the action begins, the audience is greeted by two musicians playing live music on stage but just off to one side. With a varied repertoire between them (including keyboard, drums and percussion) the duo’s melodramatic flair are a perfect introduction to the subsequent theatrics. They will provide the soundtrack to the performance, filling in for the missing words with appropriate sound effects and noises.

The stage is divided into two: a small diner on one end, with saloon doors leading into a kitchen – the floor of which, by the show’s end, will be covered in an almighty mess of flour, water and grains.

The two chefs, bedecked in stereotypical kitchen attire (think chequered trousers and a large top hat), also have their faces whitened in typical panto tradition (in this case, the white make-up could well be cooking flour – a nice touch.) Business is slow and they are unmotivated and listless. When a funky chicken – seemingly running away from someone, enters their premises, the chefs have renewed vigour and end up adopting her as a mascot of sorts. Until a belligerent customer enters the fray and all sorts of hijinks ensue.

The hammy, exaggerated acting is specially catered to appeal to young audiences — a mostly school-aged set who reacted to the strong visual cues with sniggers and laughter. Particularly well done is the slow-mo renditions of all the actors (chicken included) being flung across the room as part of the choreographed fight scenes.

A couple of small quibbles: The chicken does have a special trick but the show could’ve benefited from more magical acts from her. Also coming in at about an hour, The Magic Chicken is a tad too long for the attention spans of preschoolers. The show is recommended for 7+ and that’s a good age group for those who can concentrate on the action at hand in a show that at times can be a bit chaotic and rambling. All in all, an entertaining and energetic live act.

Quick screen break for cuddles. I suspect there w