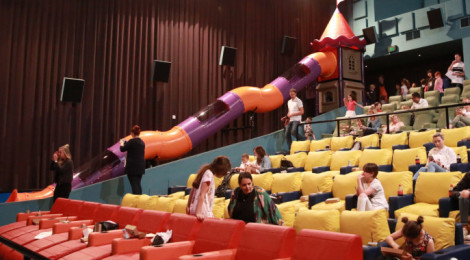 Vjunior – a cinema for kids

Families love to go to the movies, so it makes perfect sense that cinemas should cater to the needs of their junior patrons… and Vjunior is championing the way!

Just recently I took two 8-year-old boys to a kids movie and between the two of them we encountered the following:

While movie going is one of our favourite pastimes, cinemas haven’t really evolved to cater for younger kids – beyond offering booster seats and a candy bar (insert slightly sarcastic tone).  Until now!

In partnership with one of the world’s leading toy brands, Mattel’s Hot Wheels, the cinema combines two things that children love – movies and play. The concept was designed to extend the cinema experience by inviting guests to arrive up to an hour before their session begins to enjoy an interactive play area. Activities include building block-walls, light projection games, Hot Wheels activity tables and more.  Also, children’s artwork creations come to life on the big screen through custom built interactive scan and see technology.

Inside the cinema some of the features include:

Also worth noting, a new kid’s menu is available, accompanied by a coffee cart for parents.

Immi (11) and Charlie (8) both gave this new cinema experience a massive thumbs up (and both want their birthday parties here!).  It was a full house on the opening night – but Charlie still managed four turns on the slide during intermission.

So tickets to see a movie inVjunior are a little more pricey – but if you get the family ticket option it’s the same cost as four kids tickets to the regular cinema.

Opening night at the @regent_theatre to check out

PARLIAMENT HOUSE in Canberra is a rite of passage,