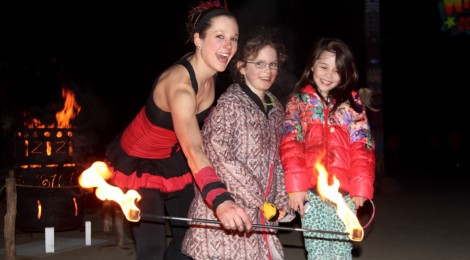 Most children would’ve had zoo excursions a-plenty, but a visit during twilight and night times? Perhaps not so many.

There’s something rather thrilling about walking about under the velvety, starry sky, knowing there are slumbering animals all around – and quite a number who are bright-eyed and awake.

Thank you to our guest contributor Thuy On for this fabulous review and photos.

Wild Nights at Werribee Open Range Zoo offers a range of nocturnal activities throughout the school holidays. It’s a canny move to de-familiarise the typical zoo visit. Animal-watching during daylight hours is after all, completely different from spotting shy little critters who come out to play at night.

Although the festivities begin in earnest from 5.30pm, doors open at 4.00. Our family of 3, as well as one of Miss 7’s school friends entered the gate at 4.30 – perfect timing as it was still clear and bright enough to see various larger-sized beasts settling down for the evening and to orient ourselves with the basic layout of the zoo (this would prove invaluable once it became darker).

We saw lions, African wild dogs and leopards nestled in their respective cubby-holes, all sweetly curled up together for warmth. Although we didn’t spot them ourselves, more vigilant eyes may be rewarded by appearances of squirrel gilders, fat-tailed dunnarts and Eastern-Barred bandicoots. We did spy a number of hippos, though they were half-submerged, unable to be coaxed out of the water. No matter, there was plenty of traipsing to do before the nightlife began.

With the amount of clothing worn, we all looked like Michelin men but the layers were completely necessary given the depths of the cold in the plains of Werribee Open. The girls played on the outdoor play equipment and when night fell were given a packet of glow sticks to arrange into necklaces and bracelets. (We brought our own but there were some on sale). By this stage night was upon us. By the light of the performers who were starting up near the entrance with their array of fire tricks, we had dinner: a picnic bought from home that was supplemented by the hot chips available at the Meerkat Bistro.

At Wild Night at Werribee Zoo, the journey is just as important as the destination. We took our time dawdling along, slightly spooked by the pre-recorded animal noises booming out at various hidey-holes and the grotesque grins on the tiki masks positioned at random intervals. With torches a-ready, we made our way to the ten-minute talk on “Serval under the Stars”. (The other alterative was “How the Lion Got its Roar.”). Passing the Secret Garden was like entering a silent disco. Picture the foliage being dappled with lasers and smoke and bats flying high above.

The serval, a large African wild cat, elicited much admiration from the crowd. It showed us its nimble athleticism and grace by leaping and pouncing and posing for meaty tricks.

Next up was the highly impressive fire show: the three performers tumbling, balancing and twirling a range of fire-lit equipment swords, hula hoops, even a unicycle.

The girls wanted to play after being slightly numbed from sitting still for half an hour so we headed to the interactive Glow Zone – a jumble of glow-in-the-dark silk scarves, hoops and other play toys. The last stop for the night (and by this time it was 8) was the marshmallow toasting with sticks over an open fire.

It was a long night, full of strangeness and wonder. When quizzed which bits they liked best, the girls were undecided: “Everything!”

Tips/comments about the overall experience:

Read our review from 2014 and visit the Werribee Zoo website for more information.

Don’t forget to get your entry in! The official

Yesterday afternoon I peddled around the block to