Wonderland at ACMI provides much to marvel at, ingenious exhibtion layouts, an impresive depth of content and plenty to delight all ages.  Are you ready to lose yourself in Wonderland?

Cost: $16-25, please note that entry sessions are at set times, so best to book ahead. 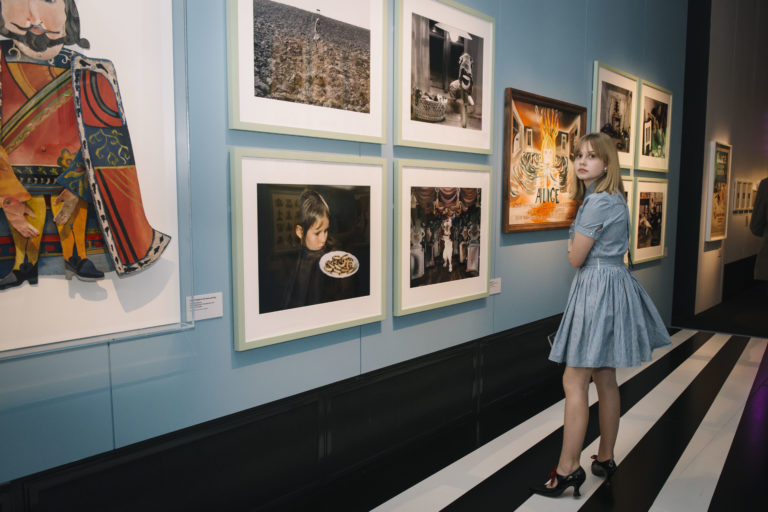 Many thanks to contributor Thuy On for attending on behalf of Meetoo and preparing this fabulous review.

This is probably one of the best (school holiday) activities around in Melbourne for families, one that caters to kids and adults alike and guaranteed to bring awed expressions of delight on every visitor’s face.

Never mind that it’s been over 150 years since the publication of Lewis Carroll’s Alice in Wonderland, his curious protagonist is still beguiling and this exhibition references and showcases Alice as envisioned through over 40 filmic adaptations. It’s not surprising to learn that Wonderland {the exhibition} was two years in the making, as soon as you enter the (multiple) doors available you’re greeted with a huge array of paraphernalia.  But before we even enter, each visitor receives an interactive Lost Map of Wonderland (there are 4 different versions) that plots a course through the show. Hang onto them because these maps can also be used as in a clever way to reveal hidden pictures.

Lest everyone forgets the actual literary genesis of Alice, the first part of the exhibition is devoted to Carroll’s novel: his first edition books, original drawings by Sir John Tenniel as well as photos of Alice Liddell (the little girl considered to be the inspiration behind Alice) are featured.

Then we’re introduced to a dazzling array of lantern slides, silent films, stop-motion, hand animation and CGI tributes and adaptations of this perennially popular book. There is much to marvel at, including but not limited to costumes, props, puppets, posters in different languages, the very first Alice film (1903) and scary horror interpretation (Alice in not so Wonderland) … really.

Be warned there will be sensory overload and like Alice, you will get lost in this labyrinthine venue with so much to see.

The organisers should be commended for the playful way they have set up this immersive, interactive exhibition, with hands-on components and special effects as well as traditional images on walls.

A highlight is the Mad Hatter’s Tea party held in a white room with white table setting, whereby a magical CGI transformation occurs, colouring and projecting images both on the table itself and on the surrounding background. In a couple of minutes you will find yourself transported to a woodland setting with an array of scrumptious dishes before you.

And later, if the kids get tired of just seeing and not doing, take them to the activity area where they can create their own card soldier, with personalised faces, to be projected on the Queen’s Croquet Grounds (making funny faces is highly recommended). It’s fitting that Wonderland ends on a repeated 6 minute loop of 18 screens, side by show, displaying the many different incarnations of Alice in pop culture and showing how this iconic figure has been forever influential since her first appearance.

The exhibition is open til October so unlike the White Rabbit you have no excuse to be late to but allow yourself at least two hours to travel through the times with Alice, it is quite simply, wonderful. 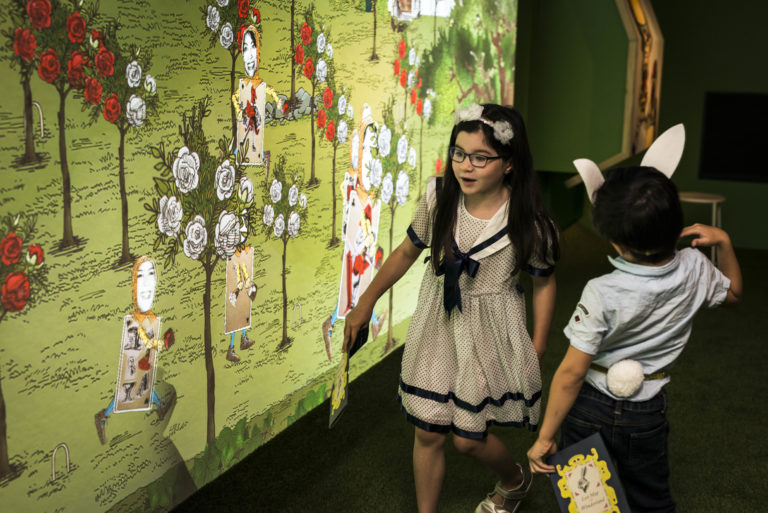