The BMW i3 offers a peek into the future, and, by i3 accounts, the future is amazing.  The BMW i3 is not a robot, it doesn’t drive itself; the i3 is a classy proposition with a design team behind it that was not afraid to be innovative, and it’s paid off as the end result is not only exciting to experience, it’s a pleasure to drive.

Relatively new to Australia (the BMW i3 arrived in late 2014) this quiet achiever is filled with surprises.   Although if you were paying attention you may have noticed that the i3 won the Australian 2014 “Wheels Car of the Year” award (the first time BMW has won the award in 50 years!).

From the outside, the i3 doesn’t scream to the world that it’s anything that unusual.  True its styling is a little space age (think souped-up version of Disney’s friendly little robot WALL-E) and on closer inspection while it looks like a BMW, it’s not like any of the regular BMW’s I know.  Our test car’s black/charcoal exterior paint scheme was a fairly smart and understated choice (but you can choose a number of options – and the extreme combinations, such as black and white, definitely make for a more distinctive and obvious space age looking i3).

Throughout the development of the i3 BMW has not been afraid to really invigorate the kinds of materials and technologies used in building a vehicle – resulting in a car that is vegan (optional) and rated as zero emission.  The body is a carbon fiber reinforced plastic material, the chassis is aluminium and materials used in the interior are a combination of recycled fibers, natural wools, eco treated leather (or you can opt for the vegan version) and sustainably farmed eucalyptus (apparently from the fastest growing trees on the planet).  There are no “new car” smells as no toxic treatments or materials have been used.  Even the plant where the carbon fibers are manufactured is powered by hydroelectric power.

So all that sounds pretty cool – and add to that it’s incredibly slick design it makes for an exciting car to both look and learn about.  But what’s it like to drive?

Well here’s an interesting fact you may not know (unless you are a car buff).  The i3 is BMW’s fastest car when it comes to accelerating from 0 – 60kmph.  Which means at traffic lights you can take off from a complete standstill and be doing 60km by the time you reach the other side of the intersection – smugly (if sedate and ecologically-supported drag races are your thing) noting that everyone else is still starting their engines.

The speed thing was awesome.  My everyday reliable workhorse of a car drives like a donkey compared to the i3 Spine-tailed Swift’s like speed and agility (FYI the Spine-tailed swift is the second fasted animal on the planet).  Obviously driving like a maniac isn’t great for your battery life (if you’re driving purely on battery power and you drive conservatively you should get 120km out of fully charged battery – if you drive like a rally driver it drops down to about 100km a battery).

Another driving thing that is different to a regular car is that you will rarely need to use your brakes – unless you need to stop in a particular hurry or need to be stationary on a slope.  The accelerator pedal acts as both accelerator and engine brake. When you release the accelerator pedal {this bit’s a bit techy}, the vehicle’s kinetic energy is regenerated by the vehicle drivetrain, recharging the battery.  This has the effect of slowing the car down.  And initially it feels quite extreme – but you quickly learn to keep the car moving forward by altering the pressure on the accelerator and only removing your foot from the pedal when you want to begin to stop (as opposed to slow down – I hope that makes sense!).  I am sure the first time we entered a freeway the person behind us must have thought I was on crack as I was trying to initiate cruise control – and thinking I had activated it I then took my foot off the pedal to find I hadn’t activated it and we immediately started a very fast deceleration!  Anyway, the whole accelerator pedal/brake thing was something I quickly mastered and by day three I had almost forgotten it was different.  (Note to self, next time do a test run with a new cruise control system on a back street rather than on a 100km freeway!)

Naturally being an electric car the i3 is completely and utterly silent.  It is a little disarming and as a driver I was hyper aware that pedestrians would be completely immune to our presence if I was out of their line of sight – so I did take turning corners of streets carefully, triple checking for pedestrians.  At one point the kids and I were driving through a car park and a group of people were in front of us happily chatting and ambling at about 1km/hr – the kids were keen for me to toot the horn at them (after we patiently rolled along behind them for a couple of minutes) but I pointed out to the kids that these people had absolutely no idea we were behind them and they would literally jump out of their skin if I tooted.. so we opened a window and turned the music up a notch at which point one of the party noticed us and they all jumped aside looking surprised and curious.

It might not be obvious in the photo’s but there is no regular car instrument panel – just two screens.  The screen mounted behind the steering wheel is the spot to find out all the control stuff about the car (like how fast you’re driving, how much battery/petrol is left, what mode you’re in, speed control and what not).  The second (and slightly bigger screen) mounted on the dashboard is the control centre for your stereo, sat nav and more general stuff (that you’re happy for passengers to be involved in!).  Added to this the i3 comes with apps you can download to your phone which allows for remote access to the car (think locking and unlocking, temperature control before you get back to the car – very handy on those 38C days with small children!).  From your phone you can also see how much battery charge you have left, you can send addresses to the car that will store in your sat nav and save you having to punch in the details (very handy when planning a trip) and a number of other clever little touches.

The final stand out thing to mention about the i3 design is the back doors – these open backwards.  There are a few positive and one negative point/s to this design.  The positive is that you have fabulous access to the back seat – unlike any car I have ever experienced.  The two back seats (yes this car is a 4 seater) are set up with all the hooks for baby car seats and if the double door access wasn’t already enough clearance space, you can also tilt the front seats forward.  Also, back seat passengers have no internal door handle – it’s only when the front door is open that the handle to open the back door is exposed; this is both a positive and negative.  If your kids are little it means that there is no question of child proofing the door handles – there are none.  However if your backseat passenger is older than say 6 years of age and likes the independence of opening car doors themselves this takes a little getting used to – naturally it’s not impossible to open the back door, you tilt the front seat forward and can reach the front door handle to open the front door and then access the back door handle… but it’s a little convoluted (and was an excellent opportunity to build my 7-year-olds patience!).

When it comes to battery charge and going the distance the i3 has two options.  The standard i3 is purely battery powered – you can charge it a charging station (which are mushrooming up around Melbourne) and it takes about 4 hours to fully charge – or you can literally plug it into the powerpoint at home, and it takes about 11 hours (so overnight).  To fully charge the battery costs $1.50.  Yes, you read that – a full “tank” costs $1.50!  As mentioned earlier a full battery lasts for about 120km – and with city driving (and constant stop start) you are actually recharging your car every time you take your foot off the accelerator.  There are also three different power modes you can drive in – we switched to the middle eco mode (with no visible changes to driving or passenger comfort) and drove from Melbourne CBD to Mt Martha and back (about 140km) on a single battery.

An optional extra for the i3 is a 9-litre unleaded fuel tank (referred to as the “range extender”).  This combines with the battery to give you a total of about 230km.  And we tested this out when we took a day trip to Ballarat (travelling about 225km).  My nervousness about being stranded on a highway with an empty battery was completely unfounded – we made the trip and returned to Melbourne with 1/4 of the battery still charged!  Before we made the return trip from Ballarat to home I did fill up the petrol tank (we’d used almost 1/2 of the petrol) just to be sure.. with $4 of petrol. HAHAHA.

I did a quick google to find out how much on average we spend on petrol a month in Victoria and apparently it’s $159, which is almost $2K a year.  In comparison, the i3 costs about $200 a year to charge (if you drive the national average of 15,800km/year).  But it’s not just fuel costs that you’re investing in here – there is also the cars carbon footprint to produce and also run, not an exact science (and if you’re curious here’s an interesting article) but a science that is bound to be getting a lot more scrutiny in years to come. 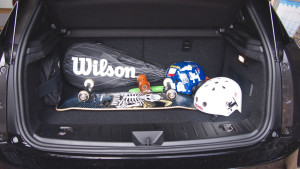 Commercial disclosure:  we were provided with the BMW i3 to test drive for five days.  All views are my own.  Back in 1999 for two weeks I was a promo girl on the BMW stand at the Melbourne Motor Show – which involved three days of intense training at BMW headquarters so that I knew the basics of every BMW model inside and out, I wouldn’t claim to remember anything much from that time, but it gave me a great appreciation for the BMW cars and brand.