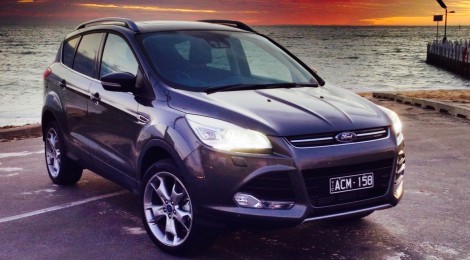 The Ford Kuga MKII Titanium is a joy to drive – and it’s filled with loads wonderful features that absolutely elevate this car beyond being just a mode of transport; the Kuga is most definitely all about the journey.

For two weeks we got to drive “Jackie” the Kuga (as christened by my son) not just all over town but on three road trips across Victoria.  Being school holidays we decided to make the most of Jackie and and really put him through his paces (I checked with Charlie and Jackie was most definitely a boy).  Our travels covered overnight stays in Walhalla, Ballarat and the Mornington Peninsula.

And when school holidays came to a close we were not only sad that the holiday adventures had finished for another term break – but it also heralded the end of our time with Jackie… the kids gave him an affectionate pat at school drop off and said their good byes with long faces.

Rather than go into details about the car specs (which you can get here) I’m just going to tell you my favourite bits and two bits I didn’t quite get.. I’ll be upfront and say there wasn’t anything about the Jackie I’d change.

Starting price for the Ford Kuga MKII Titanium AWD is about $38,000.

What’s so ace about the Ford Kuga MKII Titanium?  In no particular order here are 10 things we loved.

1. Blind spot sensors
The Kuga is blindspot free as it has detectors which light up in your side mirrors to tell you if it’s unsafe to change lanes.. this is such a reassurance when you’re travelling on busy roads – especially on a long roads trip – as you no longer have to swivel your head around just to be sure no one is about to clip you at 100km.

2. Cruise control that adapts
Again this is awesome for road trips – you can set your cruise control and get this… if you come up behind someone who is going slower the Kuga automatically adjusts it’s speed to keep you at the same speed as them and at a safe breaking distance.  The kids called this the “car driving itself” but don’t worry folks I was still steering the ship – we were a tight team!  I am an avid cruise control user and this totally revolutionised my drive (I have now had a taste of the future and it’s been hard going back to 2004 #firstworldproblem).

3.  That boot with the foot sensor thingy
Okay I am sure you’ve seen that advert where the lady swipes her foot to activate the car boot to open automatically? (If not I have re-enacted it below in a rare moment it wasn’t raining, so excuse the gym pants).  Before we had the Kuga in my mind this was a bit of a gimmick – but actually (especially given I am one of those people who is loathed to do more trips to the car than absolutely necessary) this “gimmick” was a great touch.  We had some super wet weather while we had Jackie staying with us and being able to load myself up with every bag from the boot and then wave my foot underneath before retreating indoors was awesome!  There is also the option to open and shut with a hand activated (and also key activated) button too – so they really cover all bases.

4.  Assisted parking
I have been on a couple of Ford demonstration drives at events in the last couple of years and so the parking thing wasn’t new to me… but being in the drivers seat while it was happening was new – and quite frankly (the first five or so times) it was a very weird sensation.  I am actually pretty confident when it comes to parallel parking (my regular 2004 car has no sensors or cameras so I rely on my mirrors, shop windows and educated guesses).  Do I really need assisted parking – hell no.  But Jackie got us into car spots that were so tight and (once you know the drill) very quickly; I had definitely met my match.  Also the kids loved seeing the car “driving itself”, and again Jackie and I were a team – while I had no input when it came to the steering, I was totally responsible for acceleration and breaking!

5. Lane keeping aid
This is something that is useful for when you’re out on the highway.  If you drift out of your lane (and you don’t have your indicator on) the steering wheel vibrates slightly to alert you that you’re drifting.  I don’t know about you but inevitably at some point in any car journey of ours, that is further than the end of our block (and sometimes we don’t even make it that far), my attention has been drawn to the back seat.. you don’t really want to be glancing away from the road – but if you do find your attention momentarily diverted and you drift the little buzz of the steering wheel definitely refocuses and keeps you safely on track.

6.  Auto High Beam
If you rarely travel on country roads at night then you may have forgotten that high beam even exists – it often takes me a few minutes of a dark country road before I remember to start searching for the setting.  So imagine my surprise when we turned off the highway onto a dark country road and boom on came the high beams.  They also flicked off the moment they detected a car approaching – on a couple of occasions Jackie knew there was a car coming before I even did.. and on a few occasions the reflective signs on a winding mountain road were enough to have him turning the beams up and down in a little confusion – nothing to bother our ride (but maybe if I was driving on a dark mountain road regularly I would override and just turn them on and off myself for that section).

7. Capless refuel
Now I am sure every new car must have this.. but then how have I have never seen it before or heard about it.  It’s almost so insignificant I feel silly getting so excited about it, but I want one for my car as it’s pure genius (surely it can be retrofitted?).

This incredibly simple mechanism means no more fuel cap – wahh crazy talk I know.  You pull up to the fuel bowser at the petrol station, flip open the cover and bam: instead of a normal cap there is a cap with a special retractable flap that allows you to put the nozzle straight in without faffing about.  Mind blown – how has this not existed before??  Maybe those formula one drivers have been keeping it a pit-lane secret, but I reckon we shaved a good minute off our refuel time (and I didn’t loose the cap in the process!).

8. Extra safety stuff
We didn’t try this one out (but I have been in a demonstration car where they did put it to the test and it was quite exciting) but the Active City Stop function is great peace of mind.  This ensures when you are in city traffic (and travelling 30km/hr or less) if someone in front of you breaks unexpectedly the Kuga will automatically stop for you, helping you avoid an accident.  There are also loads of airbags which you can read about here.  If you have your phone paired via bluetooth it’s automatically synced with emergency assistance – which means if you drive off a cliff, rather than waiting a few days for someone to notice the tyre marks leading down the embankment, 000 is automatically contacted.

9. Latest technology and styling
As expected the Kuga is full of the regular features like keyless entry (and locking is done by merely placing your finger on the door handle as you walk away), auto lights and wipers, all wheel drive, power steering (which felt great), parking sensors, rear camera, dual zone climate control, sat-nav, heated seats (with 5 different settings), back seat tray tables, blue tooth connectivity and phone/audio voice control.

The Kuga achieves the compact SUV exterior with spacious interior combo extremely well – in a really attractive way (Jackie was a hottie!!).  During our travels we caught up with friends and I found myself on a number of occasions with a full car – because everyone wanted to come with us (and see the car park itself).  There was plenty of room in the back seat.  Leather seats are so practical with kids – Jackie stood up to our two weeks of sticky fingers spectacularly.

10. Drive
Okay this is the clincher; it is after all a car.  What was it like to actually drive?  I loved it.  It responded well when accelerating and it felt great going around corners and over bumps (we have a few 4WDs in my family and it was most similar to my brothers Volvo, maybe better – am I allowed to say that?).  The seats were really comfortable and the steering easy but firm.  My dad is a total car snob.  When we went to visit I parked him in – so he took Jackie down to pick up the paper.  Dad was impressed – and I noticed later he snuck in another drive to go get extra milk.

Anything I’m not totally in love with?
Okay, so I mentioned there were two things I was unsure about.  This one is purely personal taste – the dashboard and control panel for the audio, sat-nav, temperature control and so on was pretty full on.  At first I was slightly overwhelmed – I quickly realised that only about 20% of the buttons were things I needed to access consistently, the rest, well maybe if we had the car longer I would have worked out what exactly it all did.  I suspect that some of these functions could have been set up slightly differently – but as I say, I am a less is more kinda gal when it comes to buttons.

The other quibble was that it took a couple of attempts to initially get the bluetooth working – but once it was set up it automatically connected whenever we got in/out the car.  The only thing I didn’t master was the voice control** (and I have used voice control before in other cars without difficulty).  The kids and I had many laughs at my repeated attempts to make phone calls and play certain songs – neither of which I managed.. but it wasn’t difficult to do it via the control panel buttons and knobs.  [**Maybe this could’ve been rectified if I had actually referred to the users manual!] 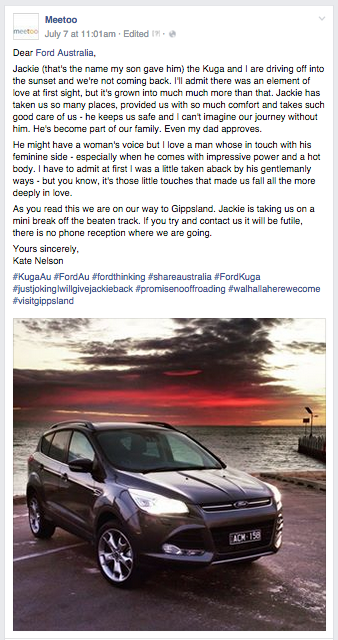 COMMERCIAL DISCLOSURE: WE WERE PROVIDED WITH THE KUGA TITANIUM TO TEST DRIVE AND ROAD TRIP FOR A TWO WEEKS.  ALL VIEWS ARE MY OWN.