Since 2014 Meetoo has been proud to become one of World Vision’s ongoing Blog Ambassadors.  In 2015 Meetoo was honoured to be a key blogger supporter of the Nappy Collective and their campaign to educate against domestic violence in partnership with Rosie Batty.

In 2017 and 2018 Meetoo is the Melbourne Family working with Bound Round to capture footage for Virgin Airlines inflight videos! 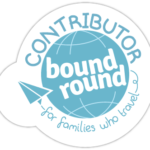 Recently we were featured here:

A podcast interview featuring family travel bloggers and on the HotelClub blog with a few other Melbourne bloggers.

Some awards we’ve been nominated for or been awarded