A day trip that offers incredible views and access to nature up close.

When:  All year.  Penguin Parade 10am till late, Nobbies 11am till one hour before sunset, Koala Conservation Centre 10am – 5pm, Churchill Island Heritage Farm 10am – 5pm.  On Christmas day the parks open at 2pm.

Where:  Phillip Island Victoria – about 1 hour 45 minute drive from Melbourne. 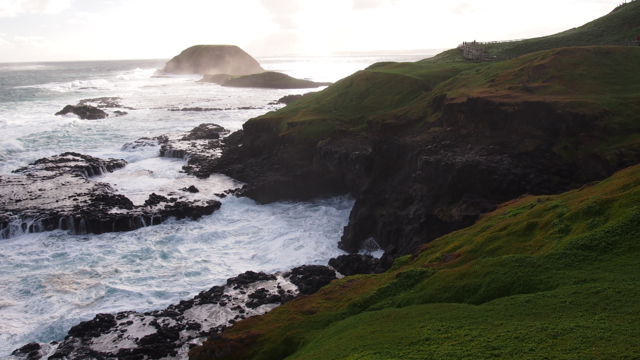 A view at The Nobbies, Phillip Island

I was quite excited about going to see the Little Penguins as this was something we’d never done when I was a kid… but I came home with conflicting emotions and now a week later I am still undecided about my experience, this much I am sure, I don’t think I will ever do the Penguin Parade again.  Why?

1. Little Penguins are not entirely exclusive to Phillip Island – sure you can be guaranteed to see lots of them here, but there are also spots in St Kilda they come to roost and also places in Tasmania (we once stayed in Bicheno in Tassie and had loads of the Little Penguins waddling by right outside our hotel window – and they are damn noisy!)

2. I found the utter disrespect for the wildlife displayed by the other visitors during the Penguin Parade quite upsetting – I also discovered a protective side of myself I didn’t realise I possessed.. even taking myself by surprise as I lunged on, not just one but, three occasions to stop people taking photographs of the birds up close, with flash.  Despite much signage, repeated reminders in the welcome speech and announcements over the speaker system (in a multitude of languages) and staff members everywhere verbally reminding us – it seemed the basic request of NO PHOTOGRAPHS and BE QUIET were quite foreign concepts for some people.

As the first little group of much awaited penguins struggled out of the wild surf grown men and women all around us leapt to their feet (completely blocking our view) and started screaming like they were at a footy match.. I was gobsmacked.  To then produce cameras… I was speechless.  Maybe this was the reason why my mother had never taken us?

By purchasing these tickets had I just somehow perpetuated an industry that exploits wildlife??  But how come I feel okay about going to the zoo??  Oh dear, as I drove home with two sleeping children I mulled and mulled.  But my final thoughts (after much internal debate) was that the set up at Phillip Island is very much commercially driven – they may boast about being Australia’s only non government funded wild life park, but that said I felt like their main concern was to get as many bums on seats.  If they really had the welfare of the animals as their main concern then there would be much more education provided to all visitors, and there would be a much stricter enforcement on the photography – ie. cameras confiscated or those visitors asked to leave immediately.  Otherwise why should anyone take this rule seriously?

The Visitor Centre at the Penguin Parade has the charm of an airport terminal (ie none).  It smells of hot chips and popcorn and at every turn there is a gift shop filled with anything you can imagine with a penguin stuck on it.  An hour before the Penguin Parade starts the doors are opened to the boardwalk down to the beach to get a seat (seating is not allocated).  We arrived 50 minutes before the parade and the place was packed – full of tourists who had arrived on one of the many many tourist buses outside.  The car park was also very full – clearly rain, wind and a bitterly cold spring night did not deter the crowd.

About 16 minutes down the road is Cowes, one of the main towns on Phillip Island – and we picked up take-away fish and chips here and brought them with us.  I was told by a local not to get dinner at the Penguin Parade Visitors Centre, and from what I saw I was very glad we got ours in town.  Plus it was lovely and warm on my lap while we sat outside being blasted by the freezing ocean winds.

Even though we arrived 10 minutes after the doors had been opened all the seats down the front had been taken, so we were about 1/3 from the front.  If I was going to do it again I wouldn’t bother with the whole getting a seat – the penguins come in out of the ocean for ages, and after the first 10 minutes loads of people start to leave.  So you could arrive much closer to the penguins arrival time – maybe see some up close on the boardwalk (which is what we did after we saw them come out of the water), try not to punch anyone using flash photography right next to your face, and then head down to the seating area and possibly get a seat down the front (by which time many of those annoying tourists will have returned to their buses – not to discredit the other 95% perfectly decent tourists).

Finally I should also mention the view of the penguins coming out of the water – it’s rather dark (there is some lighting but it’s very low so as not to scare the penguins) and they were kind of far away… my eyesight is ok (I mean I can still read a specials board in a restaurant and don’t have glasses) but even I was squinting a bit.  This could be one of those occasions where we should have paid more and done the VIP experience – perhaps then I could have been blissfully ignorant of all the unruly tourists on the other side of the sand dune??

So yes – it’s a Three Parks Pass… but in fact there are four places to visit – The Nobbies is located in the same reserve as the Penguin Parade, it’s free to visit and if you’ve come this far you must check it out.  Access to The Nobbies closes an hour before darkness, and even as we drove out (2 hours before dark) there was loads of wildlife crossing the road.  Give the Visitors Centre a big miss (unless you need the toilet) as inside it’s part giant gift shop, take away food outlet and video arcade/indoor playground – although on the far side near the windows (overlooking what is one of the most stunning views I have ever seen) is an educational area which has information about the local wild life – and this is worth looking at if you want to know more (but not that educational for smaller kids – although there are buttons to press).  The absolute best part of the Nobbies is all outside – a kilometre of boardwalk running around the cliffs.  The kids loved running along the boardwalk, the views were breath-taking and the wind was cleansing.  I could not stop taking photographs!!

Our first stop for the day was actually Churchill Island Heritage Farm.  We arrived here about 2.30pm and spent just under an hour.  The best part of the farm was actually the approach – as you drive up the driveway (you enter the island via a bridge) you can see water all around and you pass through a herd of Hairy Cows.  We felt like we were on safari – but clearly we were not as they are, at the end of the day, just cows – but with their big shaggy coats and ridiculously long horns they do look more like their cousin wildebeests than cows, thankfully they behaved like cows and just kept eating grass.  The rest of the farm experience was gift shop and cafe entrance, cute old heritage farm building (complete with rooms set up as they would have been for us to peep in at), a kitchen garden, a few animals – and some demonstrations… we had a look at the blacksmith activity – but it was really more of an explanation (there were no bellows blowing into the fire or red hot horse shoes being fashioned).

The Koala Conservation Centre also had a cafe and gift shop to pass through, BUT it had a fantastic display area you could check out before (or after) your visit outside.  Outside were a series of paths and treetop boardwalk you could wander around.  On the regular paths wherever there was a tree with a koala, beneath the tree would be a sign saying so – I thought that was rather handy.  Again we probably spent just under an hour exploring – possibly could have done two laps and lingered a little longer but it was raining.  We saw about ten koalas in all – in what seemed to be rather natural habitat and while I suspect they are captive koalas, it felt like a really natural koala environment.

So in summary – the Three Parks Pass is a great way to turn the trip to Phillip Island into an afternoon of activities.  On our way down to Phillip Island we made an unscheduled stop at the Royal Botanic Gardens Cranbourne – and so our schedule was a little tighter than initially planned for – but had we not done this, leaving Melbourne at 11am would have given us possibly too much time to explore Churchill Farm, the Koalas, the Nobbies, make a trip into Cowes for dinner and then finish with the Penguin Parade (taking into consideration that we made our visit before daylight savings – which means the penguins arrive earlier as it is dark much earlier).  Would I do it again… hmmm unless there is a major redevelopment of the Visitors Centre at the Penguin Parade I can’t see myself going again.  If I found myself in Phillip Island again I would absolutely have to visit the Nobbies again, and I would happily do the Koala Conservation Centre again with the kids.  We might even drive up the driveway of the Churchill Farm just to see if those cows were there again  ;-p

NB – children visiting with the Three Parks Pass are entitled to a passport booklet, collect this at your first stop for the day and collect stamps at each venue, collect a Phillip Island badge (or similar small gift) as a reward when you collect all four stamps on your passport.