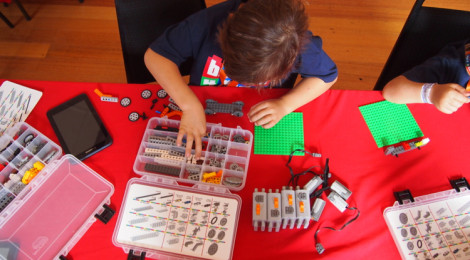 If your kids are mad for LEGO then the Bricks 4 Kidz full day workshop is a must (just be warned they will probably be begging you to send them more than once as no two sessions are the same).

When:  9am – 3.30pm during school holidays Check website for details (they also offer after school, birthday parties and school incursions)

Charlie (7) and his mate Hugo (7) helped me with this review – and they both loved every minute.

When we arrived at Bricks 4 Kidz the boys were presented with “free range” LEGO to play with while everyone arrived and settled in.  At about 9.30 all the children were invited to make a little group on the floor and go through a series of “ice-breaker” activities – for the benefit of many of the kids who had either come alone or with a sibling, as many of the projects require the children to work in pairs as a team.

After about 15 minutes or so of introductory games the children broke into pairs and worked out which project they wanted to try first.  The room had three main work tables – with each offering a different kind of challenge.  The day we attended the theme was Jurassic Park – this came in the form of a number of the projects being related to dinosaurs or things Jurassic.  But each table offered so many options on top of the Jurassic theme that if you were not into dinosaurs there was any number of things you could find to work on instead.

Each of the activities or building projects was accessed via a tablet – which is loaded with the step by step guide for each project.  Naturally the kids love working with the tablets – and the number of projects offered meant that each little team could produce different projects and potentially no one team would end up making the same thing!

In between projects there were breaks for morning tea, lunch, and an afternoon break.  Being located in a school hall meant easy access to a playground so the kids also had a chance to get some fresh air and let off a bit of steam.  Mind you with many of the kids drawn to building projects with a robotic element (such as remote control cars) and the hall providing plenty of space – there was also lots of excited interacting going on with chasing each others cars around (well at the end of the day anyway!).

The Glen Eira Stonnington program is managed by Julie Lang, who is ably assisted by full-time teacher Michael.  Julie is also able to provide packages for events, parties and school programs – and the Bricks 4 Kidz program is a worldwide organisation (so if you’re not local to Caulfield South then check out the main website, here, for a provider closer to home).

Given what I saw of the day and the reactions from the mini reviewers (who’d go back tomorrow in a heartbeat) I thought this was a fantastic holiday program that is not only fun but quietly engages different parts of the brain in the process.  While the boys didn’t get to take any of their creations home – they did get to choose either a t-shirt or cap as a souvenir.

Hey Melbourne. How was your day, mine was pawesom