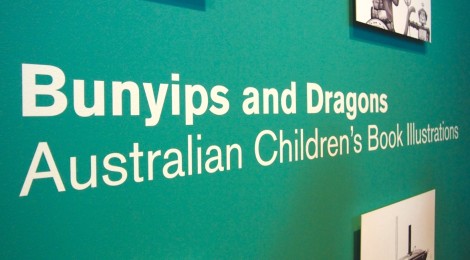 Bunyips and Dragons is a collection of Australian children’s book illustrations, donated to the NGV by Albert Ullin OAM.

This collection of 80 illustrations will no doubt be filled with the works of illustrators you are familiar with if you’ve grown up reading Australian children’s literature – or you read them to your own children.  It’s like those battered much loved books at the library taking centre stage in their Sunday best.  And while you might believe you’re looking at the real thing when you hold the book – the original artworks do actually have a special dimension to them that is a little lost in print.

The exhibition is family friendly with books to read, some story telling via iPad screens, a drawing station and For The Kids descriptions on some of the artworks.

The exhibition includes classics such as Ron Brooks’s The Bunyip of Berkeley’s Creek, Peter Pavey’s One Dragon’s Dream and Graeme Base’s The Eleventh Hour. With more than 60 artists, the exhibition covers a great range of subjects and styles, which shows the wonderful visual imagination of Australian illustrators.

Albert Ullin is responsible for this incredible collection thanks to his championing of children’s literature as the founder of Australia’s first children’s bookstore, The Little Bookroom.  Wanting to nurture local talent and encourage children’s book illustration in Australia, Ullin not only stocked Australian books but also began to buy original illustrations from local illustrators, which developed into a large collection, now on display in this exhibition. Two drawings from Brooks’ first book The Bunyip of Berkeley’s Creek feature in the exhibition and were among the first purchased by Ullin for his collection. The book is now regarded as the picture book that launched modern Australian children’s literature.  And as they say, the rest is history.