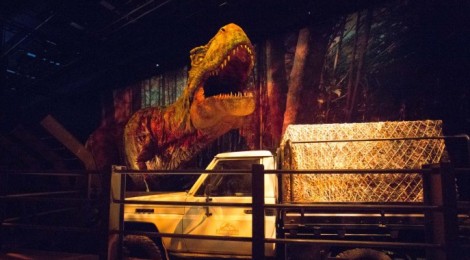 Suspend reality for an hour (give or take) and immerse yourself into a special “tour” of Isla Nublar, aka Jurassic World – the island park where dinosaurs live thanks to the work of the fictional Hammond Creation Lab as inspired by the Jurassic franchise.

This is not a regular Museum experience or exhibition.  Don’t expect to be presented with detailed information coupled with science and history.  Don’t expect interactive games and tactile experiences for the kids.  But do expect to leave with your heart racing.

This is an immersive experience unlike any other, not a dry lesson on geology and dinosaurs.  You will be required to use your imagination, have a sense of adventure and be prepared to go along on a make-believe journey.

The media release sums it up perfectly:

This is a stunning entertainment experience that blends real-life science and education with the very best in high-quality entertainment. Audiences will marvel at the incredible ingenuity behind these animatronic creatures while being swept up in the magic, the drama, and the thrill of Jurassic World.

So what do you need to know before taking the kids?

While I find dinosaurs fascinating I’ve never been obsessed with them, but honestly, I couldn’t stop talking about Jurassic World for days afterward.  The level of detail within the dinosaurs themselves (and that in the foliage and props around them) and the incredible animatronics just made them immensely watchable.  Their movements included muscles tensing, breathing, nostrils flaring, eye contact – sometimes they appeared to be watching us, or appeared startled by something and then on occasion they acted indifferent – it was a bit like a visit to the zoo!

This is not just an exhibition for kids – anyone with a sense of adventure and an interest in the prehistoric world will take something away from this journey.

Creature Technology Company is responsible for bringing the dinosaurs to life.  Founded in 2006, and working out of a nondescript factory in Melbourne Australia, Creature Technology Company is producing the most technologically sophisticated, creatively inspired and life-like animatronic creatures for exhibitions, arena spectaculars, theme parks, stage shows and events in the world.

Jurassic World: The Exhibition made its world premiere at Melbourne Museum on Friday 18 March and is open until 8 October 2016 before it embarks on a world tour.