Browse: Home   /   See the city from a unique viewpoint with Kayak Melbourne 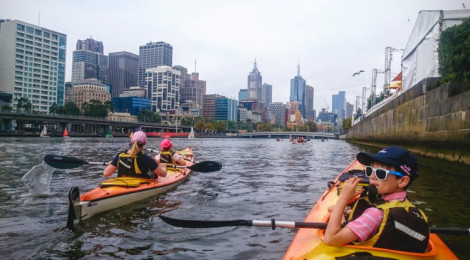 See the city from a unique viewpoint with Kayak Melbourne

Kate Nelson / March 21, 2016 / Comments Off on See the city from a unique viewpoint with Kayak Melbourne / Active, CBD, Melbourne Attractions, Things for grown ups, Things To Do & See

This tour is one that will appeal to locals and visitors alike – Kayak Melbourne take groups for a one and a half-hour paddle from the Arts Centre down to the edge of the Docklands and back.

Where:  Boathouse Drive MELBOURNE (on the river bank opposite Federation Square)

Cost:  $82/person, book here.  Not recommended for children under 6 years of age.

Charlie (7), Immi (10) and I took a City Sights Kayak Tour down the Yarra river with Kayak Melbourne.  We went underneath all manner of bridges and saw Melbourne from a completely different angle – it was a fun way to both experience kayaking and see our beautiful city from a new vantage point.

So what do you need to know?

I had a number of questions before we undertook this adventure – and now I can report back!

1. Will I be fit enough?
This was the main worry for me… my exercise regime is walking (the Fitbit says I get to almost 10K steps on an average day) and my weights workout consists of carrying school bags (combined I am sure they = about 20kg #jokingnotjoking) and the supermarket shopping (we live within walking distance to the supermarket and I regularly overfill my shopping basket – the struggle is real).  So whilst I am not feeble – I would hardly put myself in the “athletic” category.

Thankfully, for the most part, I was able to cope.  I had the added handicap of Immi… for the first half (downstream) Immi happily paddled, but as we hit the halfway mark she ran out of steam so I was pretty much on my own for the return leg… we hit a headwind coming out of the docklands and our tour guide Kent (he’s done the ironman five times) hooked us up to his kayak and “towed” us (for the record I was still paddling, but with the extra help from Kent we travelled five times as fast) and once we got through that patch I was unhooked and paddled on my own again. Immi and I might have been the last to return, but people in front of us were still unloading so we weren’t far behind (and if we had been struggling Kent would have rescued us!).

I slept very well that night and (to my surprise) woke the next morning feeling fine and had no aches.

2. Will I fall in or get wet?
There is very little likelihood of this happening – you’d probably have to stand up and actually jump out.  The kayaks are the big ones used for ocean kayaking, so they are very stable.  Occasionally a boat would go by and we would have a few ripply waves bob us up and down – but that was the extent of it.  There is a speed limit along the Yarra so it’s a quiet stretch of water as far as “traffic” goes.  As for getting wet – well expect a few drip from your paddle.  You won’t need to get your feet wet getting in and out of the boat – we actually got into the kayak before it went into the water (I wore thongs anticipating my feet getting wet and in hindsight sneakers would have been much more comfortable on my heels!).

The tour still go ahead in light rain – so if it was raining you might want to bring along a lightweight jacket.

3. What happens if your party is made up of odd numbers?
This was the case for us – so Charlie shared a kayak with Kent.  Which meant Charlie basically didn’t paddle – but rather enjoyed telling Immi and I to hurry up!

4. What if you’ve never kayaked, rowed or paddled before?
Before we actually got into our kayak we were given a crash course on what to do.  We practised our paddling technique and those of us who were taking the back seat were shown how to steer the rudder (which unlike sailing boats, where you normally steer opposite, the foot peddle rudders were right foot to go right and left foot to go left).  If you have someone in your team who is slightly more coordinated then choose them to do the steering as I think I spent more time overcorrecting than actually going in a straight line.

5.  How will the kids go?
After chatting with Kent it seems that under 12’s with no experience will be able to help out (but don’t have huge expectations).  Kids who have kayaking or rowing experience who are 12 and over should be fine to keep up with the group (if they were paddling without an adult in their kayak).  The pace wasn’t particularly fast – in fact while we were going downstream (and Immi was paddling too) we were not the last boat in the group.

6. Is this a guided tour?
Yes and no – the day we went it was a full group (maximum of 12 people and six boats, plus the two guides who travelled in two boats).  But don’t expect a running commentary of the sights and history of Melbourne.  Given we were six boats, spaced out over a 10-20 metre distance at any one point, this is not the kind of tour that you are able to stop as a group and talk.  This “tour” is purely an opportunity to get up close and personal with the river and take in the city skyline from a number of different vantage points.  For us locals it was fun to go under so many bridges and the kids were busy identifying landmarks they recognised along the way.

7. What should I wear?
The day we went it was a mild Melbourne day (and cloudy, so no sun).  My return trip (of solo paddling) ensured I worked up a mild sweat and red face to match.  I would recommend wearing whatever you’d normally wear if you were going for a brisk walk or to the gym.  Sunscreen, a hat and sunglasses are definite musts.  Given you don’t get your feet wet normal shoes or sneakers are fine (your heels rest on the floor of the boat and if you are sitting at the back and steering it’s more comfortable to do this with shoes that cover your heel comfortably).  The Kayak Melbourne website recommends you bring a change of clothes (or pants) if you are going out straight afterwards – but personally, if I had the option, I’d want to have a shower first if I was going somewhere that required me to be in something dressier than sweatpants!

8. What do I take on the boat?
Handbags and other incidentals (in our case scooters) can be stored in the Kayak Melbourne 4WD (that tows the boat trailer) while you are on the water.  Each kayak carries two bottles of water – so you don’t need to bring a drink bottle.  And given the unlikelihood of falling into the water it’s relatively safe to take your phone or camera along for the ride if you want to capture some of the sights along the way (as chief paddler and steerer, I can say that any photo’s I managed to take were  attempted with ninja-like speed as every time I paused paddling/steering duties my co-pilot drew my attention to us veering off course and falling behind).

9.  Where exactly do you meet the Kayak Melbourne guides?
Look out for the 4WD vehicle towing kayaks parked on Boathouse Drive – the spot where the road ends nearest to Princess Bridge and looking across the river at Fed Square.  If you happen to arrive early – the spot to wait is on the path outside Richmond Rowing Club.

10. Toilets and breaks.
The nearest toilets are located in Southbank (so make sure you go beforehand as it’s, at best, a 10 minute round trip to the loos from the meeting spot).  During the City Sights Kayak Tour there is no disembarking or stopping as such.  The overall pace is fairly leisurely so you can stop if you need to or just paddle slowly – as Immi and I were the slowest boat on the day we (that would be me) had little down time, but others in the group (who were all pairs of adults) certainly had a more leisurely experience than I probably did and there was a “rest” moment where we turned around to return (this was just after Immi decided she was tired so I was catching up to the group at this point).

I really enjoyed getting out on the water!  Charlie had a ball – and I am sure the fact that he had Kent to do all his paddling was a contributing factor.  Immi is a strong kid, but she probably needs to be a year older to make the full distance (and the fact that we were running late to her friends birthday party also had an emotional effect on her progress when she realised how far we’d travelled at the half way mark).  Before we went on the tour Charlie was adamant he didn’t want to go and Immi all gungho for the experience – and the moment Charlie clapped eyes on the boats he did a 100% turn around.  I would recommend this tour for families with school-aged children – and if your children are younger than 12 you might want to check in with Kent beforehand to see if he can take one of the kids in his kayak.

We’ve not been kayaking before and this was a wonderful introduction to the sport and also a lovely way to see the city and the river.