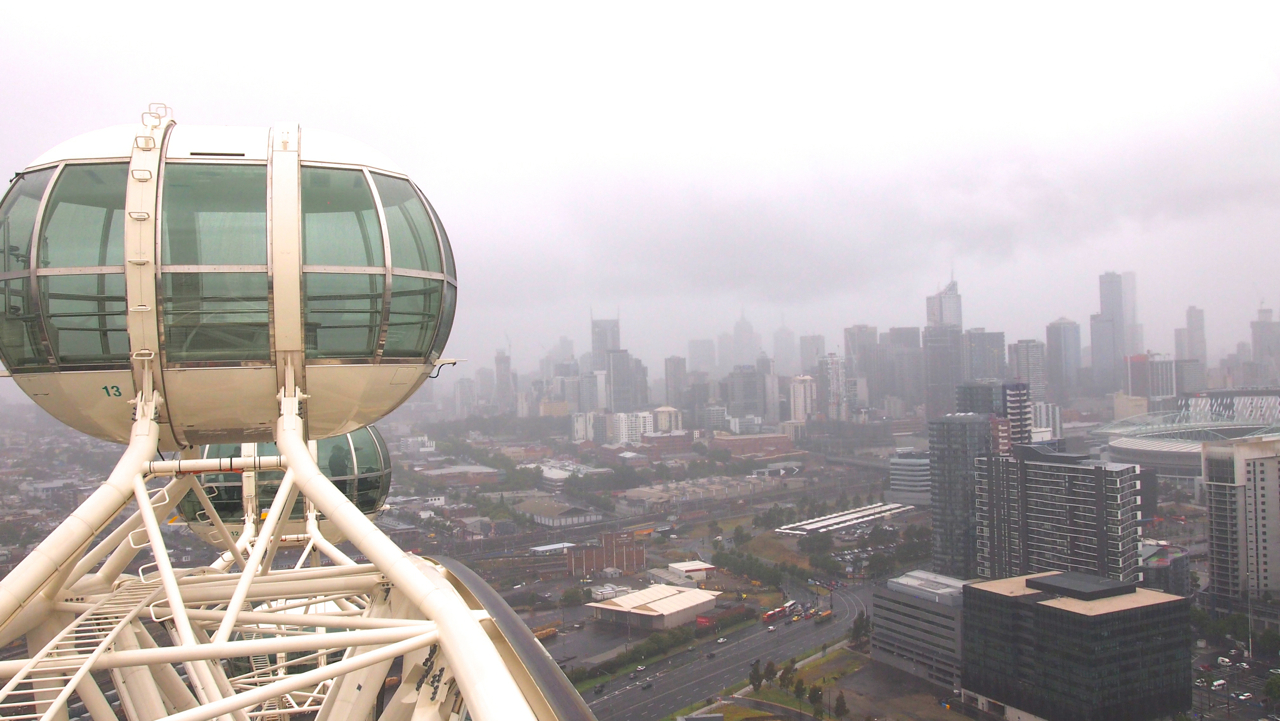 Melbourne’s newest landmark combines both the excitement of a ride/experience as well as a new view of Melbourne from up high.  The Melbourne Star Observation Wheel is the equivalent of 40 storeys tall at the top and the full rotation takes about 30 minutes to complete.

When: 10am – 10pm with the last flight departure at 9.30pm.  Melbourne Star Observation Wheel will open from 1pm on Christmas Day (December 25) and Anzac Day (April 25).  Operational hours are subject to weather conditions and may be changed without notice.

I happened to live in London back in 2000 when the London Eye opened and so I have had a few “flights” in the past on the Star’s British cousin – so the ride wasn’t entirely new to me, but it was to the kids and they loved the experience.  With a “flight” duration of 30 minutes from beginning to end we had plenty of time to explore the ever changing skyline as we moved; we also had plenty of time to admire the structure and mechanics of the Melbourne Star Observation Wheel itself.

The speed of the Wheel is so slow (about 25cm/second) that while you are looking at the skyline it is virtually impossible to tell you are actually moving – you need to look back at the wheel itself to notice the very gradual and smooth movement.  And because it travels so slowly it doesn’t need to stop to let passengers on and off – you literally hop on (or off) as it slowly moves along.  There are staff standing by to assist if you’re not sure footed or have a few children with you.

The pods themselves are temperature controlled so it might be cold and raining outside – inside you’re protected and oblivious to the extremes.  Given their glass casings you can take in the 360 degree view simply by turning your head.  For the first ten minutes or so there was a voice over (possibly Eric Bana) mentioning city landmarks – but we were a bit too excited to concentrate on that, so I can’t tell you what he said (although the kids did ask if we could turn him off, we couldn’t).

We went along to the media preview and typical Melbourne we had a winter day in late December!  So it was grey and misty outside – meaning our view wasn’t as fabulous as I am sure it could be.  We were looking over the Docklands at shipping containers, the city skyline, Flemmington, the Bolte and Westgate bridges, and on a clear day you can apparently also see Port Phillip Bay, Mount Macedon and the Dandenong Ranges.

We can’t wait to go back and see the city at dusk with a pretty sunset.  And with three and a half kilometres of LED lighting incorporated into the Melbourne Star’s new design there will be a spectacular nightly lighting show involving more than 15 million different light combinations.

Also LEGO fans make sure you check out the 3m LEGO replica of the Star in the gift shop – we loved pressing the button to make it turn as well as checking out all the minifigs positioned around/in it (Darth Vader was even in there).

Finally everyone (well the three TV channels and a newspaper journalist who pounced on us as we disembarked) asked us if we thought it was worth the ticket price.  I would suggest that given it’s not something you would do very often (I imagine maybe once for novelty and then perhaps again if you had a visitor from out of town to show around) that although it’s not as cheap as a trip up a tall building (read our Eureka Skydeck 88 review) it’s a different kind of experience.  Maybe it’s the perfect gift for someone who has everything.

I should also point out that none of us have a fear of heights so this was not an issue for us.  But given the pods are completely enclosed and the structure is very solid and secure I personally found it less daunting than say the ferris wheel at the Melbourne Show (which is much much smaller but you sway in the wind and are in a small open-air cage).

Commercial Disclosure: We were invited to the media preview.  There was no expectation that I would publish a review in exchange for the invitation. All views are my own.