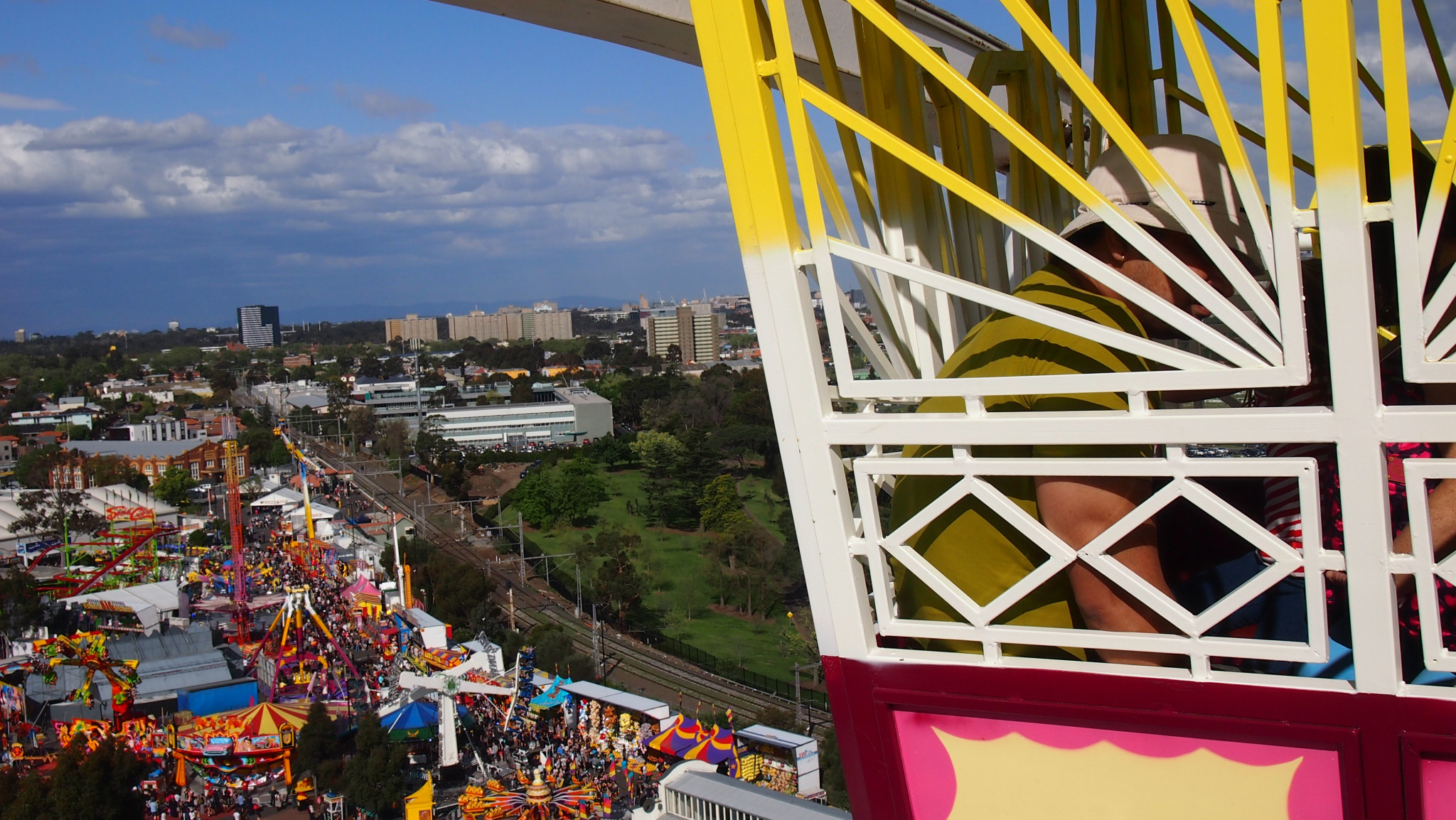 What to expect at the Royal Melbourne Show and how to enjoy the experience with young kids.

Every day at the Show is a new experience with different demonstrations, agricultural competitions and events.  Last year our focus was on food and livestock pavilions – which is not to say we didn’t still try our luck at winning a toy, go on a ride, load ourselves up with showbags and more!

Okay it’s near impossible to do everything at the Show in one visit – and with each day offering different experiences it’s a tricky event to review.  However here is a little diary of our day which will hopefully give you some ideas and insights into what you might expect to see and do.

This year we caught the train in – this is my preferred option as it involves much less walking (however I must point out that at the end of the day I am often deliriously tired and one year we accidentally caught an express train from Flinders St which took us four stops further, whoops, and this year we caught the totally wrong train home from Flinders St, as Peppa Pig would say: “silly mummy”.  Thank goodness my children were so excited with their showbags they seemed to forgive me, or perhaps they were to tired to complain – nah that can’t be possible, can it??)

LAST STOP
Our rule is showbags are the very last thing we do before we go home (who wants to carry anything extra around all day and be distracted by some toy that’s going to get lost/broken about 20 minutes after it’s opened – am I right?).  Naturally 15 minutes after we arrive (and having now had the showbag conversation with Charlie, aged five, for the 20th time) Charlie asks can we go home now – only so that he can get his showbag.  He had spent a good hour on my computer the day before making his shortlist of showbag favourites… which we had whittled down to about four potentials.  Whilst this experience resulted in us knowing far too much about the contents of showbags in general, we did get a high proportion of our “window shopping” out of the way at home – so when we did enter the Showbag Pavillion (clearly with diminished brain power as demonstrated by my choice of train home) we only had to do one lap (thankfully the stalls are very repetitive, so halfway along you pretty much get the gist of what’s on offer) and both the kids were sorted.  Final showbag comment: while I know bribing is kind of the lazy path in discipline, I have to say the showbag ‘card’ was a terrific motivator at moments.

FIRST STOP
So our first stop for the day was the Art, Craft & Cookery Pavilion – we were lured in by the yarn-bombed car and caravan out the front.  Inside we checked out all the amazing cakes and cookery finalists – marvelling at the junior entries, wow.  There were not only things to look at but also a great crafting area set up, and run by, The Art Factory.

Next door was the Weekly Times Livestock Pavilion – being the first week we got to see a number of animals.  While we were there they were awarding ribbons to the goats with the best milk.  There were also prize winning cattle and sheep on display.  Those who wanted to could reach in and pat the sheep and some of the cattle were not fenced off and so we also had a pat with some calves.

We were lucky as the day we went the Garryowen Equestrian Turnout was happening – so we saw some stunning horses with their riders in their finest going through their paces while we sat an ate our lunch at the Coca-Cola Arena.  Click here for more information on horse events.

Sadly that particular day it was too windy for the tightrope walk by clown Bello Nock or, more importantly, the Freestyle MotoX Team.

We had a good wander around the Woolworths Fresh Food Pavilion – this is a great spot for a large selection of food vendors if you haven’t made up your mind for lunch.  There is also other produce for sale and sampling.

The kids tried their luck at winning a stuffed toy (thankfully we didn’t win big and I wasn’t tasked with lugging around a giant Papa Smurf for the rest of the day) and we had a ride on the Giant Sky Wheel – I love going on the Wheel as you get an amazing view of the showgrounds as well as Melbourne.

After our ride and amusement it was my turn to have some fun so we headed for the Tastes of Victoria Pavilion.  I am not a gourmet cook – you won’t find fancy recipes on my pinterest – but I do love to eat good food prepared with passion, so I was curious to have a look.  The highlights for me was the wonderful styling (love a good pallet, herb garden and blossom tree installation) and the Pop-Up Restaurant of the day, which happened to be Fonda, was serving the most delicious pineapple and mint juice – just hit the spot on a warm afternoon.

Next door was the Pets & Kids Zone (this has changed in 2015) – this is where you go to pat-a-cat and see the Pedigree and Whiskas stands, it is also filled with lots of objects for sale that might inspire pestering.  We managed to make a Girl Guide badge, have (what to me felt like) a bazillion turns with those stacking cups and then we went and patted a cat and a puppy and a kitten and I somehow managed to steer the kids out of there having only seen about 15% of the Zone.  PHEW.

If your children love getting into gardening and creating then make a beeline for My Backyard – we spent ages here and tried our hands at everything on offer.  (I now have two odd shoes on the front verandah sprouting flowers as evidence.)  We patted bunnies and chickens, made things, planted things, ran around, sat still, met lots of lovely people working and volunteering there – it was a great spot.  There were a few nice-looking food vendors and lots of hay-bales to sit on.  Not much cover though if the weather was nasty. If you went last year you will find this years Backyard all about activities and much less about gardening retailers – so from our perspective much better for families.

Next to My Backyard is the Paddock To Plate (in 2015 this is called the Farmhouse) – it was getting late in the day when we discovered this and so they were sort of finishing up in here.  We did see a cow being milked (and they were also making butter with the milk).  The kids had fun in the little supermarket and also digging in the dirt for potatoes, carrots and beets.  Our energy levels were flagging – but I think if we had come here earlier in the day there would have been lots more to experience (see the link above).

Our last stop (before showbags) was the Masterchef Kitchen – which is where they film Masterchef.  It’s a shrine to Masterchef; everything is still set up and you are invited to come inside and see it in real life.  Like everything on TV – it seemed much smaller in real life!

Finally I should point out this year we went mid-week on a glorious and sunny day – it was medium to busy (everywhere was crowded but the activities that we wanted to join in required no waiting).  Last year we went on a weekend when the weather was fine – it was very busy: we queued for most things and shuffled through the crowd.  If you really want to avoid the crowds my pick is Grand Final day – we went on a rainy Grand Final day a few years ago and were the only people in the Family Carnival area!

Want to know more?  Read our review from 2012.   And check out our review of what it’s like to go to the Show at nighttime.

8 grain salad from Estelle in the Tastes of Victoria Pavilion

Amazing ice-cream from Woolworths Pavilion at 196 Below. Salted Caramel amazing

Tags: fun things for kids at the show, Royal Melbourne Show, Taking kids to the show, top 5 tips for surviving the show

Opening night at the @regent_theatre to check out