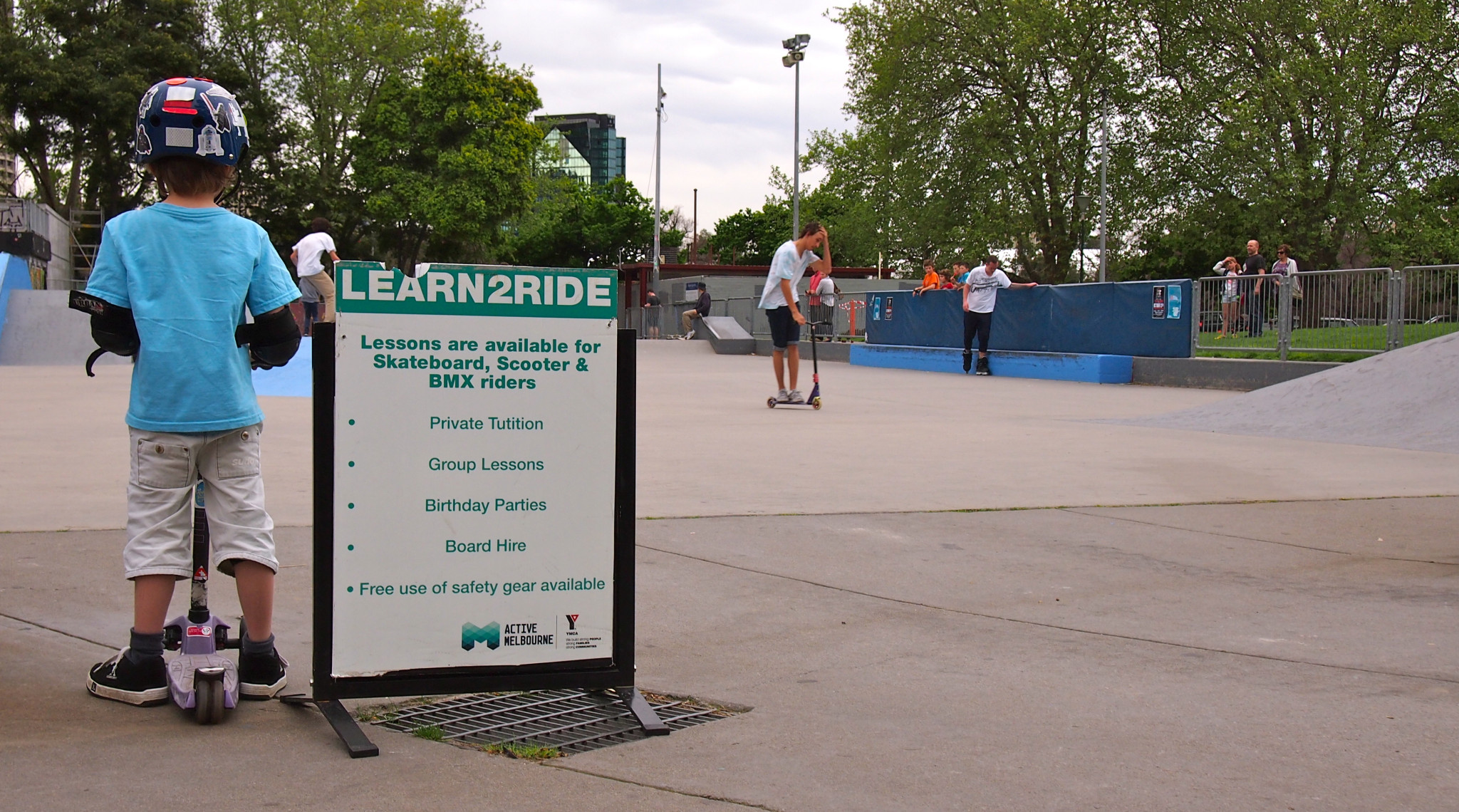 The YMCA at Riverslide Skate Park in the Alexandra Gardens run skate, scooter and BMX lessons and holiday programs for complete beginners right through to those perfecting their back-flips.  Our expedition to try out one of these classes was led by Charlie (5) and unexpectedly resulted in a new found passion for Immi (7).

Where: Riverslide Skate Park, Alexandra Gardens, Boathouse Drive MELBOURNE (as well as many other locations around Melbourne, check the website for more details.)

When we arrived Immi wasn’t even sure she wanted to get out of the car (she’d had a big morning and a skate park filled with boys wasn’t really what she had in mind for her afternoon).  But I promised if she joined in the class for at least 10 minutes she’d still qualify for the post class icy-pole and Charlie was very chirpily promising her he’d take care of her (he was brimming with excitement).

So the kids got kitted out with knee and elbow pads – they decided to use their own scooters (but they could have used the Learn 2 Ride scooters) then they met their teacher and were off.  10 minutes passed and Immi was grinning from ear to ear and in no hurry to give up her class.  The class ended and they begged to keep going – the icy pole was long forgotten.. in the end I appeared with the promised icy poles to entice them to take a break.  Lucky we had the whole afternoon and nowhere to be as they skated non stop for 2 hours.  Next time I will take a picnic rug, the paper and get comfortable!

While my two had a scooter lesson a group of other boys were having a skate board lesson, and meanwhile the constant activity of the skaters, scooters and BMXers was going on all around them – it was pretty congested at moments, but somehow no one collided and the kids seems quite unfazed by all the activity going on around them.

I was quite impressed at their confidence as the rabble wasn’t just little boys having a skate board lesson – it was teenage boys (some who were the size of men) and they like to appear to be rough and tough when they were off their wheels – however as far as I could make out that bravado was all for show, in the Park they seemed to be looking out for each other – my little kids were never made to feel lesser riders or unwelcome (even Immi in her dress and pink scooter).  In fact I noticed everyone helped each other out and waited their turn – regardless of ability.

The YMCA run the Skate Park (and not just Riverslide – there are loads of other skate park locations around Melbourne that they organise lessons at) and are also located in the cafe building next to the Park.  Lessons are held between 10.30am – 2.30pm every weekend and during school holidays – as well as school holiday programs.

The guys from the YMCA were incredibly approachable and not only professional in their running of the program, also clearly into getting kids active and having fun.

As we finally got in the car to come home Immi begged could we come again tomorrow; she mentioned at dinner time that today had been her best day ever and if she was allowed she wanted to go to the skate park every day during the holidays; and at bed time again she asked could we have another lesson tomorrow – if this was coming from Charlie then I would not be surprised, but coming from Immi – well it must have really made an impression.

I should point out that the Skate Park is open 24/7 and it’s completely free to use – so you don’t need to necessarily have a lesson, but watching the kids today transform made me appreciate just how much one lesson can offer – particularly Immi who was so timid and scared at the beginning and then by the end of the class there was no slope she couldn’t scoot down!  Charlie is very keen to get some air – and I know I would much rather he got some pointers on this from an expert.