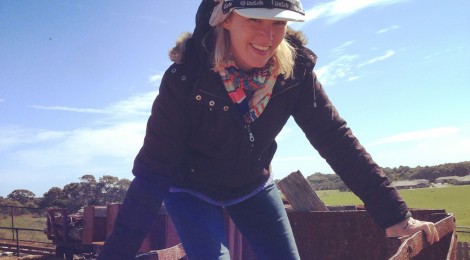 Not far from the beaches of Inverloch is Gippsland’s State Coal Mine – a little bit of political and geographical history that influenced the development of early Victoria.  There is the fabulous history behind the mine – but on face value alone, this is an experience families will long remember and provides a great day out.

Tour of a turn of the century laundry – from living treasure

The train that brought us back up from the mine

Play area next to picnic area

An hour and a half from Melbourne is the Wonthaggi State Coal Mine – it is the only historic coal mine experience in the Southern Hemisphere, offering interactive fun and interest for the whole family both above and below ground.

Rising from its beginnings as a make shift ‘Tent Town’, Wonthaggi quickly grew to become a thriving town. Operating from 1909 to 1968, the State Coal Mine produced almost 17 million tonnes of coal for Victoria’s industries and railways.  If you like history, stories of surviving the odds and seeing first hand the conditions of our grandparents and great grandparents – this is a feast for the imagination and sure to inspire all ages.  Not only was there plenty to see and do – but some of the guides, who still volunteer their time, actually worked in the mine or grew up around the mine – so you can ask them first had about their experiences and memories!  (But hurry I suspect in a few years they might have retired)

We arrived mid morning and happily explored above ground for almost an hour before going underground.  The tour went for about 40 minutes (I suspect its length depends a little on how many are in your group and how many questions are asked).  We walked down a gentle sloping path down into the mine and then followed some of the tunnels, stopping at points of interest along the way.  Our guide even took a pick and “mined” some coal for the kids to souvenir.

There was only one brief moment when the lights were turned off so we could experience what it was like with just torches – but otherwise the tunnels were lit and evidence of modern day safety systems were in view and looking well maintained (for those nervous about going underground!).  It was quite mind boggling to imagine the conditions and what the labour must have been like for the men back then.

Thankfully when our exploring underground was over we didn’t have to climb back up to the surface – the carts that once carried the coal out have been replaced with a little passenger train (which was slow, but an experience).

Back on the surface there was a museum to explore before we headed to the cafe for lunch.  I had the baked potato and the kids had the toasted sandwiches – it was all delicious.

All up we happily spent four hours exploring.  There was also a fantastic BBQ picnic area that looked very inviting for families and groups.  The grounds are a great space to play in and so I can imagine if we had some friends with us we could have easily spent the entire day here.

Not far down the road is Inverloch and Phillip Island.