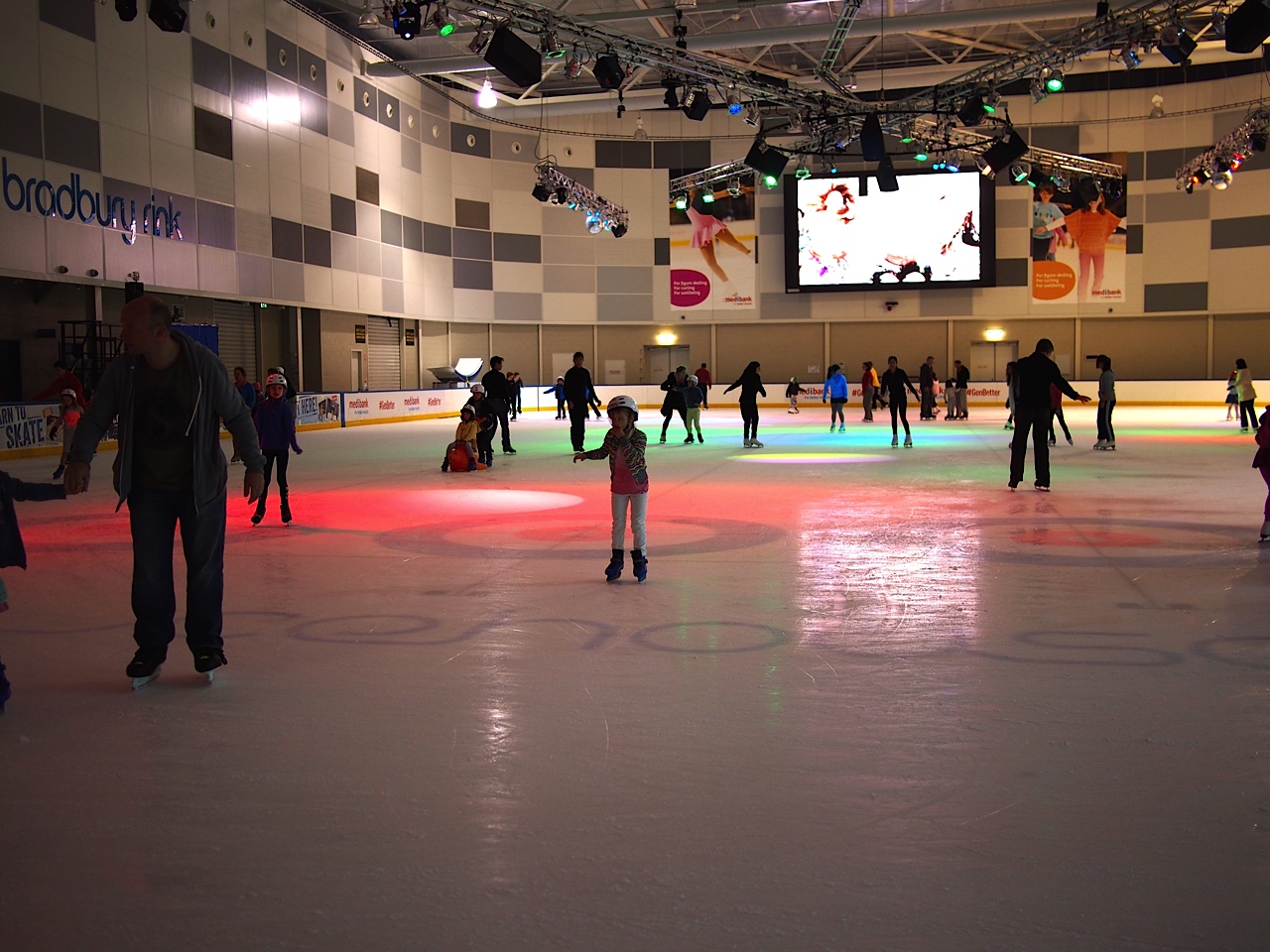 The Under Eights Ice Fun play sessions at O’Brien Group Arena are the perfect introduction to ice-skating for first timers!

When:  Every Sunday from 9 – 10am during school holidays

Thanks to guest reviewer Nat and her family for testing this one out for us!

As Aussie kids, mine have had lots of water based experiences but haven’t ever been to the snow or had any experience playing in snow or ice.  Our visit to the O’Brien Group Arena changed all of that when we visited for a Sunday morning ICE FUN session, designed especially for the under eights.

I must say it was a challenge to get up and get three kids out of the house to make it by 9am on a Sunday morning for the full hour session, even with my early risers!  Sorry readers I didn’t check out the coffee as it was all systems go when we did arrive, lugging a spare change of clothes (as recommended), water and some snacks.

We arrived a little after 9am and after checking in at reception we were given our skate hire coupons to go and collect skates ready for the ice.  We did initially plan that we would all use the opportunity to get our ‘ice legs’ by wearing our shoes which is allowed during this session to provide toddlers with the chance to experience the ice with the stability of shoes (sneakers recommended).  However, there was never any question with the two eldest (ages eight and six) that they wouldn’t attempt skates and were soon pulling them on as if we visit every weekend.  So, that left us adults and Miss Nearly Three left in shoes, well that was until MNT decided that she was not about to be left behind in shoes and refused to budge until she was provided with her own (totally adorable) mini pair of skates.  We were told she got the smallest pair available so that is something to consider although realistically kids any younger than three probably couldn’t manage them anyway.

As it turned out, my husband was the ONLY one on the ice in shoes after I caved and also decided to don skates for the full experience.  It would have been difficult to manage the kids without one of us having stability on the ice as we are complete novices!!

The kids were provided with very cute Bobby Seal aids that they could alternatively sit on and be pushed around or use as a skate aid; just quietly this aid became by best friend under the guise of pushing one of the kids around the rink!  It was a little disheartening to step onto the ice at the specially designated ICE FUN area to see a white haired grandpa elegantly gliding around the ice and four year olds zooming around, skating as confidently as they walk.  However, it wasn’t long before Naomi, one of the fantastic Ice Ambassadors spotted Luca looking a little wobbly and offered him some one-on-one coaching.  He was much more confident after her tuition and was soon pushing his sister around with the seal aid, grinning from ear to ear.  Chloe, six, started the morning being pushed around on the seal and she ended the morning the only one on the ice, well after the hour had finished and going around the full diameter of the rink, determined to have a go without an aid at all.

Another Ice Ambassador, Emme, offered Miss Nearly Three the chance to have a go standing on the ice rather than just being wheeled around on the seal.  Emme took her for a little skate around with her in between Emme’s legs, very cute.

The venue is split between the two rinks, one for the ‘beginners’ which is split again with cones highlighting the ICE FUN kids area and then another rink which was holding classes, kids getting coached and more experienced general skaters.  We did find that when the other rink closed to be resurfaced there were a lot more experienced skaters zooming around us but this was short-lived and they soon made their way back to the faster rink.

The ICE FUN section is where the Ice Ambassadors are available for assistance and the ice also has some toys for the kids to play with such as tubes and a toboggan.  However, on the day we visited there wasn’t the ice play area (clam shell full of ice with buckets to play with) that is shown on some of the images on the O’Brien Group Arena web pages.

Coincidentally, I bumped into the husband of one of my mum’s group friends who was there with his five year old daughter.  He had just been to the States so she had her own very shiny new pair of skates and was doing a reasonable effort of moving around the ice.  He said they go quite regularly together and enjoy doing an activity that is a little different.

We didn’t need that change of clothes after all but we did venture into nearby Port Melbourne for a decent coffee afterward!

OBG Arena provides 3 hour lockers at a cost of $3 per locker, for storage of any personal belongings while you’re having a skate.  What to wear: warm comfortable clothes, long socks and gloves. Change of clothes is recommended as children will be playing in snow.  Skates or shoes can be worn by children and adults.

Before you hit the ice you just need one essential item – your ice skates! There are two types of skates, Figure Skates (standard) and Hockey Skates. The choice is up to you! What’s the difference?  Figure skates have a toe pick at the front and are the standard skate you are given unless you opt for Hockey Skates.  Hockey skates are more sturdy and don’t have a toe pick at the front. Many first timers find this better to learn in. If you hire Standard Skates and decide you would like to try Hockey Skates you can upgrade for just $2.