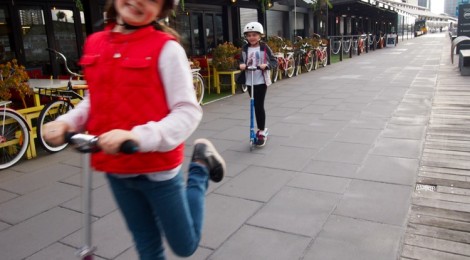 Filled with wide pathways, few roads, interesting nooks and crannies – the Docklands is one of Melbourne’s best places to scoot!

Where: catch the train to Southern Cross Station, jump on a city circle tram or leave your car in one of the many car parks in Harbour Town

A architectural spot to enjoy a view

With wide boulevard type paths, parks with winding paths, the Webb Bridge and plenty of ground to cover – scooting is the only way to get around the Docklands.

We recently enjoyed an overnight “staycation” (you can read about it here) in the Docklands and I wanted to make sure we explored everywhere – which would be an impossible ask of the kids if we were doing it on foot in such a short time.

Our base was the Sebel Hotel – from here we could see both the water and the Melbourne Star from our window, so we were in the thick of it.

We made an easy journey (with stops for coffee, a playground visit and general exploring of the sights along the way) from our hotel over to South Wharf – due to all our stops I can’t say for sure how long the trip would take had we gone direct (but I am guessing 15 minutes?).  Not only did we have bitumen and concrete paths along the way but we also had wooden boardwalks and even perforated metal – which made for some fun textures (nothing our scooters couldn’t easily handle).  In our travels we crossed two roads – and otherwise we were on paths that were shared for bikes and pedestrians (so nice and wide).

We also explored the area around the Library at the Docks (and found a new playground as well as had some quiet time inside the library playing games).  We used our scooters to take us over to O’Brien Arena when we went ice-skating (you can leave your scooters behind the skate hire desk if you fold them up) – we pretty much scooted everywhere.

Even when we waited for our dinner to be served that night the kids went outside for a couple of laps up and down the Newquay Promenade and mama got to drink her Cambodian beer in peace; winning. 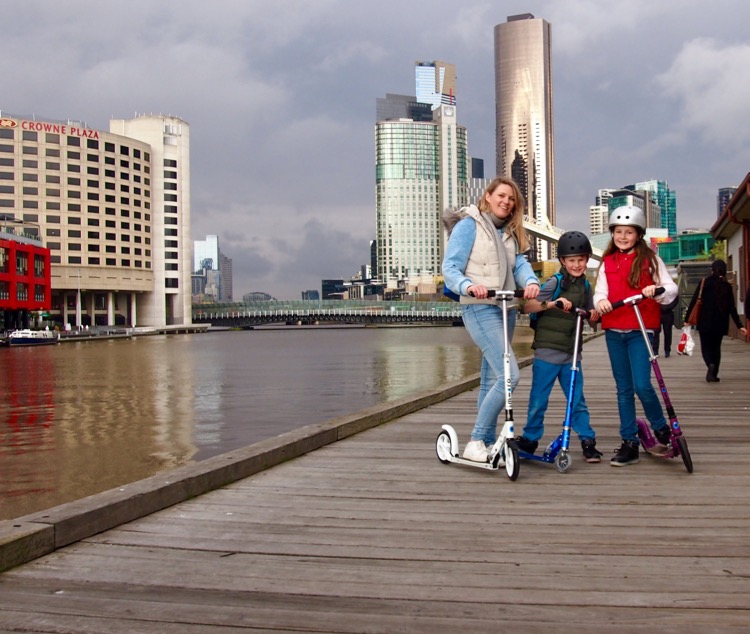 A little background on our Micro journey

We are long time fans of the Micro Scooter – being introduced to them when Charlie was almost 2 while visiting friends in London.

Charlie was a month off his second birthday, he spoke about 10 words (he was a late talker, not that you’d know now!) and he jumped on our friends Micro Mini and flew down Primrose Hill like an F1 racer… me running wildly behind him with my heart in my mouth.  He got to the bottom of the hill and turned to me with the biggest grin – and then proceeded to scoot along behind my friends kids like he’d been born to scoot.  And when he ran out of steam I grabbed the handle bars and pulled him along – this was much easier than wielding a bulky stroller through London!

Back in Australia I couldn’t wait to get my hands on a Micro Mini, and once we did Charlie was so permanently attached to his scooter I wondered if he could actually walk further than 10m.  The Micro was a godsend – Immi was 4 by this time and she had been walking everywhere for two years and Charlie had no interest in being in the pram; but you know what walking with toddlers is like:  Torture.

I am all for stopping and smelling the roses… it’s the inspecting every ant and walking in zig zags that kills me – and I had already done that with the first child.  The Micro meant we could cover much more ground – and still have time for some leaf collecting without doing my head in.  I also took up informal jogging for a while – until we had the waiting at corners and driveways down pat.

It also meant that I didn’t necessarily have to take the pram everywhere – if we were making a trip into the city for the morning (and there was no risk of Charlie falling asleep on the tram ride home) the scooter was much easier to manage on public transport and getting us around town.  If I needed him to stay close to me I could hold onto the handle bars – or if I needed him to walk (eg an escalator) the Micro Mini was light enough to throw over my shoulder.

Our Micros (Immi had a Maxi Micro) were put through their paces… and then some.  Across the two of them we replaced the brakes twice, had new hand grips three times and even replaced part of the base – the kids battered them (and the reason we had to replace part of the base was because some big kids at school thought it would be funny to jump down a flight of stairs on the Mini).  But given all the parts could be replaced – it saved us having to buy a whole new scooter.  And when the kids outgrew them we were able to sell them! (We had our scooters serviced and fixed at Spin in South Melb Market)

So given my love of Micro – you can imagine my excitement when my director at work announced we had a new client and it was Micro.  A perfect match in my mind for Meetoo (thankfully they concurred).

Now I have to admit I was a little nervous that I would look like a total idiot and fall off and embarrass (myself and) the kids in public when I first took the Micro White for a spin – but it wasn’t the case at all.  After a few tentative scoots I was off – just like Charlie had been back in 2010.  And just like Charlie – I had the biggest grin on my face and couldn’t wait to keep going.  And the kids were thrilled – they love that I can keep up with them… they even told me I am cool – and promised they weren’t joking.  (With a tween in the house – my days of being considered even remotely cool are seriously numbered.)

I know in reality I am really just a middle aged woman who runs the risk of possibly looks like a bit of a dork to most of the parents at school – but you know what, I couldn’t care less.  Scooting is not only fun (maybe the closest thing I can compare it to is skiing) it’s a great way to get from A to B and get a work out.  Our commute to school takes five minutes in the car (mostly due to traffic) and almost 20 minutes to walk – we timed ourselves scooting and it took us six minutes door to door.  Added to that by the time I got back home six minutes later I was a little breathless and happy. 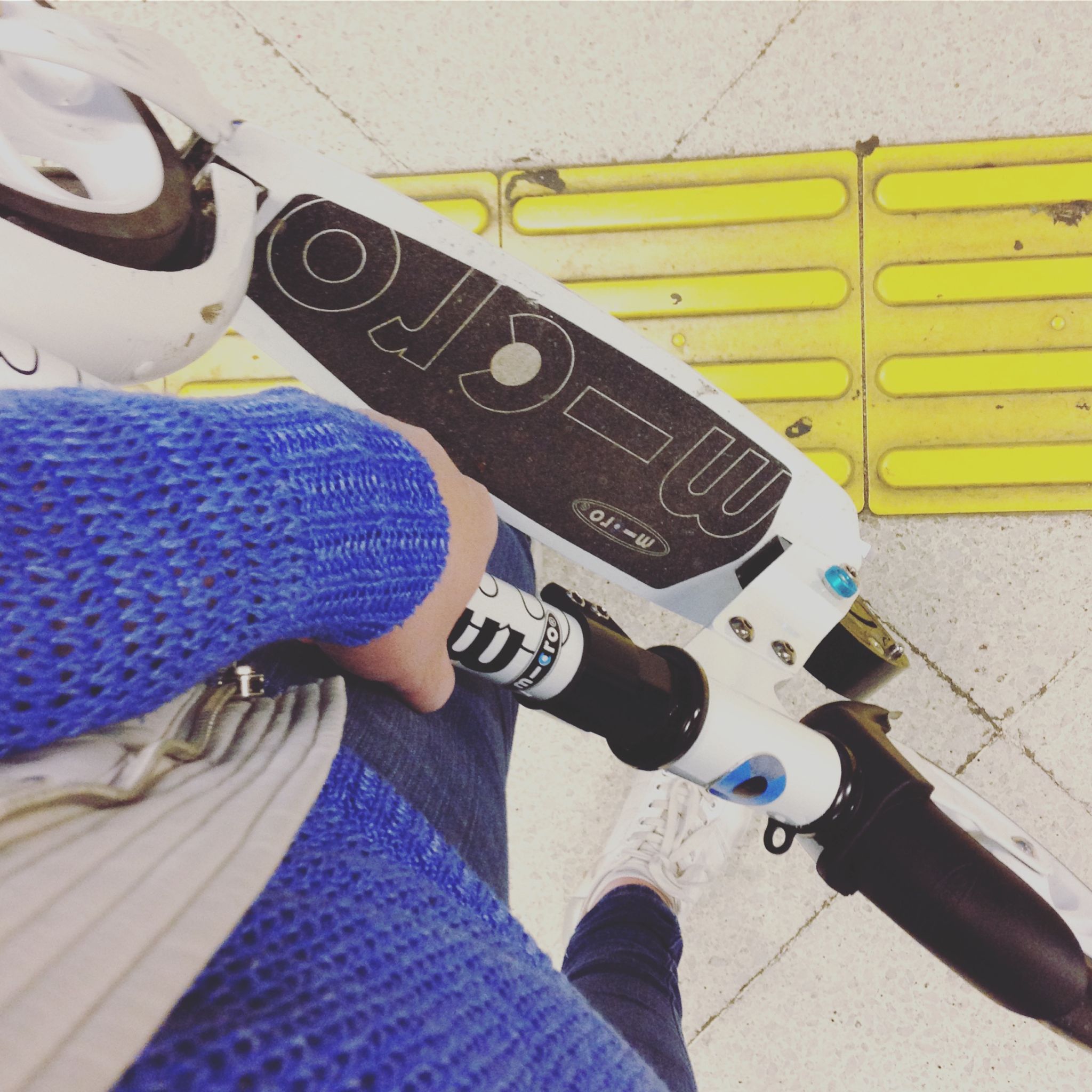 Disclaimer: We were supplied with a Micro Sprite and a Micro White – Immi already had her own Micro Flex.  I am a self-appointed #micromum