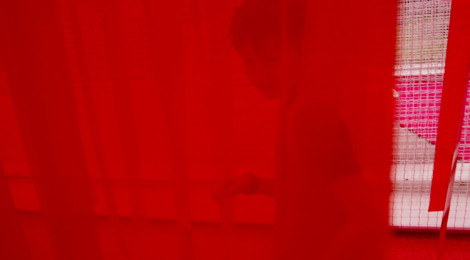 What’s on at the NGV Internation this summer for families?  We paid a visit recently and checked out a few FREE things to do.

Where:  Main entrance and Grollo Garden

The premise of this installation is that visitors agree to share some joy.  A little like paying it forward, this installation invites you to pick a flower – not for yourself, but for a stranger.  And part of the experience of giving is that you have to actively change the course of your journey when you leave the gallery to gift your flower to a stranger.  Hopefully, this act of random kindness will have repercussions of the good karma kind – and maybe, like Sliding Doors, the disruption to your route will change your destiny.

The kids loved the idea of taking a flower – they looked at all the flowers before choosing one each.

Charlie wanted to give his to the NGV cloakroom attendant – but I had to explain that going to the cloakroom was an intended part of our journey.

So to mix things up we decided that we wouldn’t catch the train home – but would instead catch the tram.  And we certainly had some unexpected experiences on that trip home that we probably wouldn’t have had if we’d taken the planned route.

Immi gifted her flower to an elderly lady at the tram stop – the woman looked slightly embarrassed (in a pleased way) and looked to me to make sure it was okay – I tried to explain that it was part of an installation at the gallery as we hopped onto our tram, but I’m not sure she understood – she said something about it not being Mother’s Day (although I am not sure why she said that, clearly she wasn’t our mother – and surely that’s not the only reason someone would give you a flower?!).  Charlie became suddenly shy about gifting his flower so, in the end, I gave it to someone in our street (not exactly a detour from our journey home but we were running out of time!).

This very playful architectural installation is an homage to the suburban car wash – except much more colourful!  Be warned tho – despite its playground-esque looking appearance it’s not for climbing or hanging from… and those ropes were incredibly tempting!  The mist machine provided much excitement from all the children in the vicinity, coming on every so often for about a minute.

You could be forgiven for not noticing this smallish exhibit next to the neon hot pink car wash – we almost did…  It was only because I was wondering if maybe they were setting up a coffee cart that I took an interest in what was going on and then realised that someone was wearing virtual reality goggles!

Who could pass up the opportunity to enter a virtual world for FREE!

Ideally, you should be aged 12+ to have a go but as no one else was having a turn and I promised to stay within 2m of the kids while they had a go, they got to try it out.  I can’t promise the same for you however, pray for no crowd and a flexible staff member.   Naturally, the kids immediately worked out exactly how the new world worked and what to do (unlike the pensioner who was having a go when I first clocked the exhibit – he was quite intent on walking into the only object within a 4m radius).

When you enter the 3D virtual world you are in the actual Grollo gardens – albeit a slightly unreal version – and you have the power to change the 2016 NGV Architecture Commission project into different colours and textures.  You also witness the sun going down and a surreal moonrise, and you can step into portals that take you to different vantage points around the garden.  It was a curious experience and all up lasted about 2-3 minutes.

This exhibit doesn’t run during wet weather – and I wouldn’t recommend you doing it if you are visiting the gallery with toddlers and don’t have another adult to help you out!

← Halloween spooky activities (no sugar required)
Where to Halloween {Melbourne 2016} →